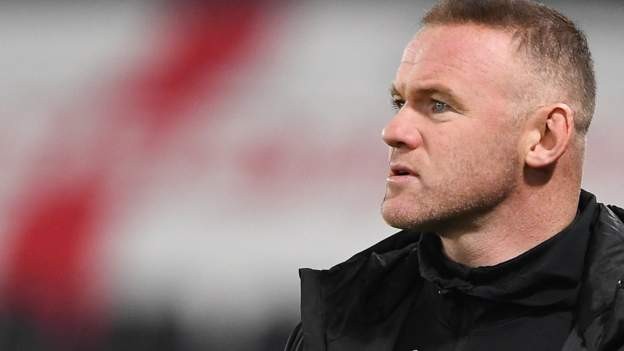 Wayne Rooney joined Derby as a player coach in January 2020

Wayne Rooney wants "answers" as to why Derby County's takeover is being delayed and why players have still not had their December wages paid in full.

Chief executive Stephen Pearce said on 14 January there were "no problems" for owner Mel Morris or prospective owners, the Derventio Holdings Group.

"We have to have answers in the next few days," boss Rooney told BBC Radio Derby after Saturday's 1-0 win at QPR.

"It's a big week. We have to show the ambition to move this club forward."

"No problems" with Derby takeover

A deal between Morris and the Derventio Holdings Group, owned by Sheikh Khaled, a cousin of Manchester City owner Sheikh Mansour, was first agreed in November.

Rooney has overseen an improvement on the pitch since taking caretaker charge in December and subsequently being appointed on a permanent basis this month.

Saturday's 1-0 win over QPR at Loftus Road was Derby's second successive victory and takes them five points clear of third-from-bottom Rotherham United - albeit having played three games more than the Millers.

Asked about the takeover delays and continued uncertainty with the end of the January transfer window approaching, Rooney added: "I will be on the phone to Stephen Pearce and Mel Morris to see where we are at and hopefully get that pushed through as quick as possible.

"I want to bring in players in this next week and and until the players are paid, I can't do that."