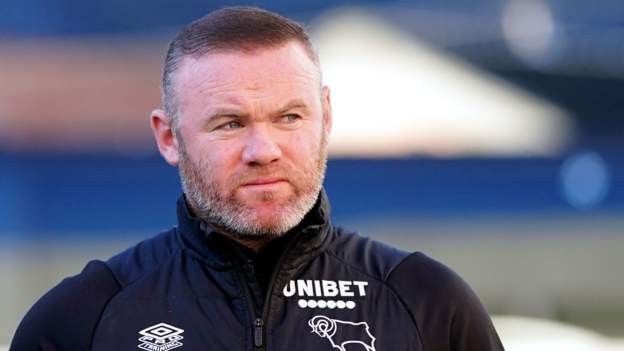 Wayne Rooney turned down the chance to talk with Everton about their managerial vacancy because he wants to stay and help Derby out of the mess that threatens their entire existence.

Rooney was on a shortlist of candidates to replace Rafael Benitez.

"Everton approached my agent and asked me to interview for the job, but I turned them down," said Rooney.

"It was a difficult decision. I believe I will be a Premier League manager and that I am ready for that 100%."

He added: "If that comes with Everton, great. But I have a job at Derby, which is important to me."

Derby have been in administration since September and remain in the relegation zone, eight points from safety.

Everton contacted Rooney's long-time adviser Paul Stretford, who in turn informed the club's administrators that the former England skipper has decided to remain at Pride Park.

Rooney spoke to Derby's administrators before his media conference ahead of Sunday's Championship encounter with Birmingham.

Although he had been given no further information about Thursday's announcement that Derby have been given an extra month to provide the Football League with detail around how they will fund the rest of the season, Rooney did confirm no players would be sold before Monday's transfer deadline.

That news comes amid interest in skipper Tom Lawrence from promotion-chasing Bournemouth.

"I have spoken to Tom," said Rooney. "His agent was speaking with the administrators.

"He is the captain of the club and has had a fantastic season. There is no issue with me and Tom.

"The administrators have assured me he won't be going. That is that."

Rooney repeated his plea for clarity over a preferred bidder for the club, although said the ongoing compensation claims from Middlesbrough and Wycombe, which threaten to land the club with a £60m bill, are "a real stumbling block".

The sense of crisis around Derby has led fans to arrange a protest march to Pride Park from the city centre ahead of Sunday's game, when over 30,000 fans are expected.

"The message to the fans is to keep supporting us," said Rooney. "We will keep working to do our job but the stuff off the field is out of our control.

"We just need assurances this club can move forward as quickly as possible."