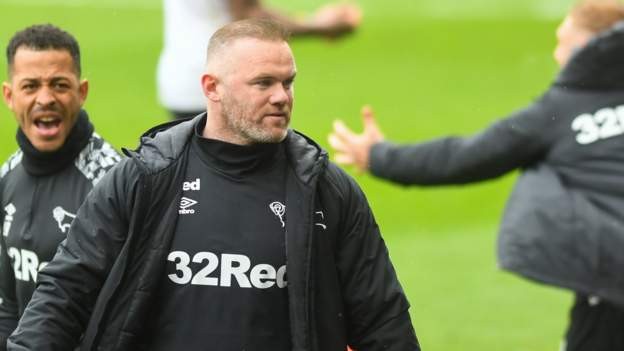 Derby County manager Wayne Rooney said the club needs clarity over the ownership after they avoided relegation to League One on the final day of the season.

The Rams fought back to draw 3-3 with Sheffield Wednesday and stay up by one point, sending the Owls down.

A takeover of the club was agreed in April but is yet to be confirmed.

"This season has been crazy. We need to sort out what is going on quickly," Rooney said.

"We can not have another season like the one we have just had. It is impossible for us to allow ourselves to be in this position."

Rooney added: "If we move forward then I am confident in my ability that I can get this club back to where it belongs."

In April owner Mel Morris agreed a sale to No Limits Sports Ltd, owned by Spanish businessman Erik Alonso, but it is yet to be formally completed.

The Rams stayed up despite failing to win any of their final seven games and Rooney acknowledged that things away from the pitch had not made his first role in management an easy one.

The England and Manchester United legend retired as a player to take over after Phillip Cocu was sacked in November with the Rams bottom of the table.

Rooney, who described himself as relieved, said he used the fans who had turned up to welcome the team to the ground as part of his pre-match team talk.

"I thought it was brilliant to see the fans outside and I just told the players that they had to do it today for them and for people in this city," he said.

Rooney revealed he had watched Sister Act 2 last night to relax in the hotel room, the sequel to the film he had put on the night before Manchester United's 2008 Champions League final win over Chelsea in Moscow.

"I'm quite calm in high-pressured situations and I'm OK at switching off. I have to be," he said.

"It's a feel-good film and helped me to relax."

Wednesday manager Darren Moore was back in the dugout for the first time since recovering from pneumonia after having Covid-19.

The Owls boss, who thanked everyone for the support he had received during the time he was ill, said he had only been given the all-clear to return to the sidelines on Thursday.

Moore was Wednesday's third full-time manager this season after Garry Monk and Tony Pulis were sacked.

He said that he felt his side, who knew they would have to win to stand any chance of staying up, had "left everything on the pitch" after a rollercoaster game.

Moore, who left his position as Doncaster manager to take charge at Hillsborough in March, said he fully intends to lead the club in League One next season.

"There is not a minute to be lost now as we prepare for next season. All my thinking up until now was about the club staying in this league and now I have a new head on tomorrow," he said.

"I'm committed to the club, irrespective of what had happened here today.

"If we'd stayed up I would have been here saying there is work to be done and it's no different now that we've gone down."

The Owls were deducted six points at the start of the season, reduced from 12, for breaching English Football League spending regulations.

Without the points deduction they would have finished two points above the bottom three, with Derby going down instead.

"It is what it is and I knew that when I came in. We just didn't quite get it over the line today," Moore added.

"There were fine moments that just didn't go our way today and now it's about moving forward."

This will be Wednesday's third spell in the third tier since they were relegated from the Premier League in 2000.