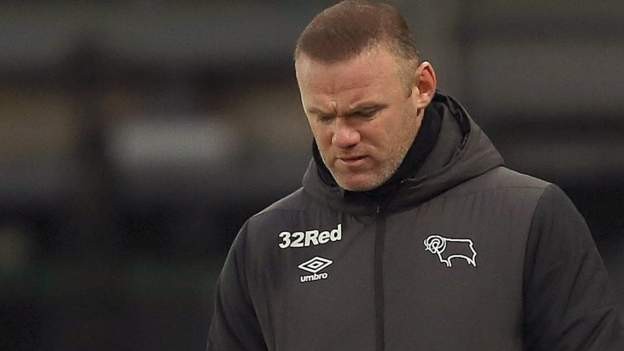 But sadly for an England legend, all the hype and build-up fell flat.

Wayne Rooney may not have taken charge of Derby for the first time on Saturday, but their game against Rotherham did mark his first as their full-time manager. However, it appears the visitors didn't read the script.

Find out how they spoiled the plot while other sides enjoyed better fortunes in front of goal in our round-up of the afternoon's stories across the English Football League.

There was the big reveal and then the big sit-down news conference on Friday afternoon, but just over 24 hours later, Rooney's life in full-time football management seemed less rosy.

With ongoing takeover talk off the pitch and signs things were beginning to improve on it, Derby would have arguably started as narrow favourites.

But it would turn into an afternoon to forget for England's record goalscorer as he began to realise exactly what the chance to "roll his sleeves up" in management will look like in the months ahead.

Rotherham should have gone ahead in the first half, but a seemingly routine finish from Millers captain Richard Wood was adjudged offside.

Derby responded and had their chances either side of half-time, but Jamal Blackman stood in their way before Jamie Lindsay netted the only goal of the game with four minutes to play.

It means Rooney's side drop to second from bottom in the Championship after their second defeat in their past three games.

"It's a disappointing result, we know we can play better than we did," he told BBC Radio Derby.

"We just lacked that little bit of quality on the ball. We just didn't seem to settle ourselves down."

There is not long for Rooney to dwell on the defeat as Derby host third-placed Bournemouth on Tuesday.

"Hopefully it's a one-off and we can get back to how we want to perform on Tuesday," he said.

"The good thing in a way, is that there's another game coming up quickly. It'll be tough and we'll certainly have to be better to get anything out of it."

Nottingham Forest fans have had to be patient for Chris Hughton to make an impact since taking charge in October, but now the Reds are reaping the rewards of their autumn appointment.

Saturday's 3-1 win over Millwall was a seventh game unbeaten in a row, and the first time they have scored three goals since June's win over Huddersfield.

The former Newcastle and Brighton boss has worked hard on giving the East Midlanders some defensive mettle, with just four goals conceded across the seven-match streak.

Saturday's win, and the scoreline in particular, suggest progress is being made at the other end of the field - with Sammy Ameobi's two impressive strikes trebling his season tally.

"We've worked hard for that," Hughton told BBC Radio Nottingham. "It's the first game of the season where we've scored three goals, but it was the performance behind it that warranted it against a very good Millwall team.

"Sammy has got it in his locker, and this is our request to the offensive players: 'Can you make a difference?', and it's up to the quality in the side to make that difference."

When sides go on a winless run, you expect goals to be a rarity. But incredibly, Rochdale have found the net 11 times in their past four outings, despite not taking three points in any of those games.

After a 4-1 loss to Gillingham before Christmas, Brian Barry-Murphy's side had drawn 3-3 with Crewe and 4-4 at Charlton since new year.

And Dale raced into the lead at home to Wigan on Saturday through striker Stephen Humphrys before the Latics responded with two quickfire goals from Kyle Joseph and Callum Lang.

Jimmy McNulty was then sent off for Rochdale but Jake Beesley soon made it 2-2. Will Keane thought he'd netted the winner for Wigan late on, only for Humphrys to snatch a point in the 95th minute.

Another game, another high-scoring draw. Rochdale's 3-3 result against their Greater Manchester rivals means they go 18th.

Wigan may not have held on to a win on the road but six League One away sides were victorious on Saturday. Peterborough, who cruised past MK Dons 3-0, were the only side to get three points at home.

There may have been plenty of excitement at Spotland Stadium, but in League Two it was a snoozefest.

Seven of the nine fixtures ended in draws, four were 1-1 and three were 0-0.

Wins for Barrow, 1-0 against Scunthorpe, and Leyton Orient, who scored two late goals to beat Morecambe 2-0, were the anomalies.

And despite their game with Mansfield being postponed following positive Covid-19 results, Carlisle remained top as the three teams that could've gone ahead of them all dropped points.

Newport were held 0-0 by Salford City - the first time they've failed to score this season - while Cambridge United and Forest Green Rovers were briefly heading to the summit before being pegged back by Colchester and Port Vale respectively.

At the bottom, 24th-placed Southend or 23rd-placed Grimsby could have climbed to safety with a win.

But, you guessed it, their game also finished a draw - a stale 0-0 with just five shots on target.