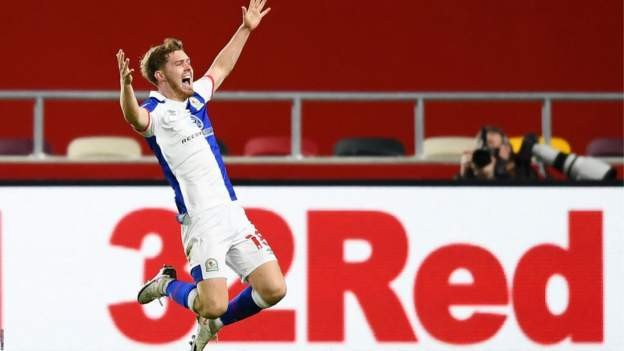 Brentford Community Stadium hosted fans for the first time as 2,000 Bees supporters were allowed in

Jacob Davenport rescued a point for 10-man Blackburn Rovers against Brentford in the first match played in front of fans at the Community Stadium.

Joe Rothwell put Rovers in front with a super solo effort, running past three reluctant challenges before lashing a shot into the corner from 18 yards.

A straight red card for Blackburn skipper Darragh Lenihan after bringing down Ivan Toney looked harsh, but the in-form striker took full advantage, firing the penalty into the bottom corner to level.

Sergi Canos' own moment of magic put the Bees ahead, dancing past three challenges before lashing a shot into the far top corner, but Davenport poked home a late equaliser after the hosts failed to clear.

It was a poignant day for the Bees as they welcomed fans into the Brentford Community Stadium for the first time since its September opening, but it was Rovers who started the better, and Rothwell hit a low drive inches wide in the opening minute before beating David Raya in style.

However, Lenihan's dismissal and the resultant spot-kick drew the hosts level although they could not exploit their man advantage, with neither side managing a second attempt on target before the break.

Much of the build-up centred on the match-up between the Championship's top scorers Adam Armstrong and Toney who had racked up 27 goals between them prior to kick-off, but aside from Toney's clinical penalty both had a quiet afternoon.

The hosts predictably dominated possession after the interval, with Emiliano Marcondes firing a 25-yard effort a yard past the post, before Canos' super strike looked to have wrapped up a fourth straight win for Thomas Frank's in-form side.

Curling efforts from Josh Dasilva and substitute Bryan Mbeumo flashed just wide as Bees looked to seal victory, bit their failure to add to the lead cost them when when Davenport's late intervention extended Blackburn's unbeaten run to seven matches.

Brentford are now unbeaten in nine and remained in sixth place, while Rovers, who have scored 31 times in 16 league matches, stayed in ninth.

Attempt blocked. Ethan Pinnock (Brentford) left footed shot from the left side of the box is blocked. Assisted by Dominic Thompson.

Attempt saved. Emiliano Marcondes (Brentford) right footed shot from outside the box is saved in the centre of the goal. Assisted by Mathias Jensen.

Ryan Nyambe (Blackburn Rovers) wins a free kick in the attacking half.

Tariqe Fosu-Henry (Brentford) is shown the yellow card for a bad foul.

John Buckley (Blackburn Rovers) wins a free kick in the defensive half.

Daniel Ayala (Blackburn Rovers) wins a free kick in the defensive half.

Attempt missed. Bryan Mbeumo (Brentford) left footed shot from the right side of the box is high and wide to the left. Assisted by Mathias Jensen.

Attempt missed. Josh Dasilva (Brentford) left footed shot from outside the box is too high. Assisted by Ivan Toney.