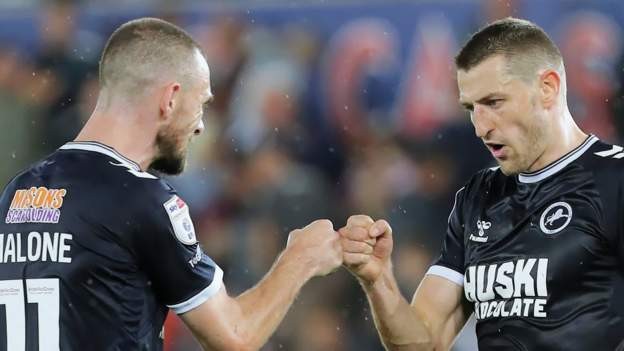 The Lions were 2-0 down inside 12 minutes but, with fans heading for the exits on 93 minutes, Harry Darling's own-goal halved the deficit.

Then three minutes later Nathan Wood turned a cross into his own net to send the travelling fans into rapture.

"I can't believe they stayed - if I was them I would have been tempted to go after 25 minutes," Rowett said.

He told BBC Radio London: "We knew this week was a hellish week. No team would relish a five-hour trip down to Swansea on a Tuesday night, let alone the fans.

"They are passionate about the club and at least the players showed that same passion in the second half to get something out of the game."

Swansea took charge through goals from Ryan Manning and Michael Obafemi but it sparked the Lions into life.

"We had to ride a bit of luck because Swansea still open you up and create those moments of quality. But we put them under pressure and if you keep knocking on the door and ask question, it's up to the opposition to see the game out," added Rowett.

"We took something out of a game that probably after 30 minutes I couldn't see us taking anything at all."

Millwall, who have seven points from their opening four games, face another testing trip to title favourites Norwich City on Friday.