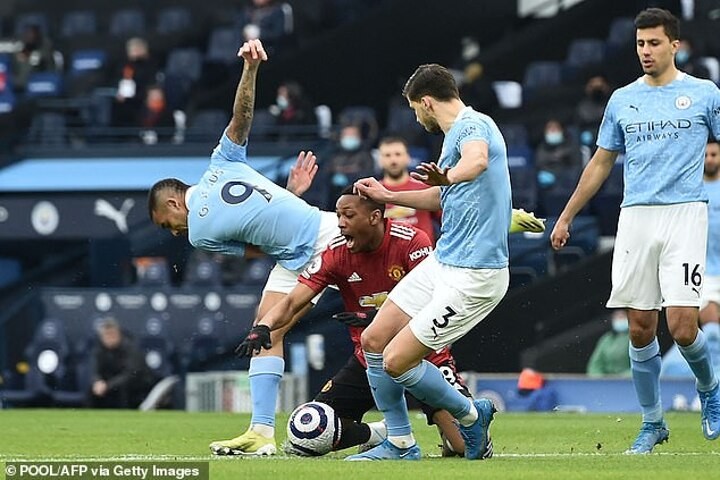 Roy Keane and Graeme Souness have both blasted Gabriel Jesus after gifting Manchester United the early lead in City's derby defeat on Sunday.

City's incredible 21-match winning streak in all competitions came to an end against rivals United with Bruno Fernandes and Luke Shaw getting on the scoresheet at the Etihad.

United got off to the perfect start after a rush of blood to the head from Jesus, who gave away a penalty with just 30 seconds on the clock for tripping up Anthony Martial.

Jesus had initially given the ball away inside his own half before desperately tracking back, but as he looked to win it back, he clumsily fell into Martial to give away a stonewall penalty which Fernandes emphatically converted. And following the final whistle, Keane tore into Jesus.

The former United captain told Sky Sports: 'It's stupidity. What's he doing? What is going through his mind? It's a car crash. It's crazy, a minute into a derby and he's doing that.'

And fellow pundit Souness was in total agreement, labelling the Brazilian striker 'dopey' for his involvement.

'It was just dopey play by someone who was angry at himself because he'd given it away,' Souness added. 'Defenders would assess that quickly, but he has two goes at him.

'United would have been nervous going into the game. They get a penalty, they get an enormous lift. They played it was like a big European night away from home.'

'He got a rush of blood to his head,' Richards said when analysing the penalty. 'He makes a mistake and tries to make up for that. He's got Stones and Dias there, so he doesn't need to make a tackle there. It's cost City the game there really.'

It was a nightmare start for City after going behind with just a minute on the clock at the Etihad.

City desperately searched for an equaliser but United held firm throughout before punishing the hosts.

Just five minutes into the second half, Shaw doubled United's lead after firing home into the bottom right corner, leaving Ederson with no chance in the City goal.

The 2-0 defeat brought an end to City's astonishing winning streak but they are still set to march towards their third Premier League title in four seasons.