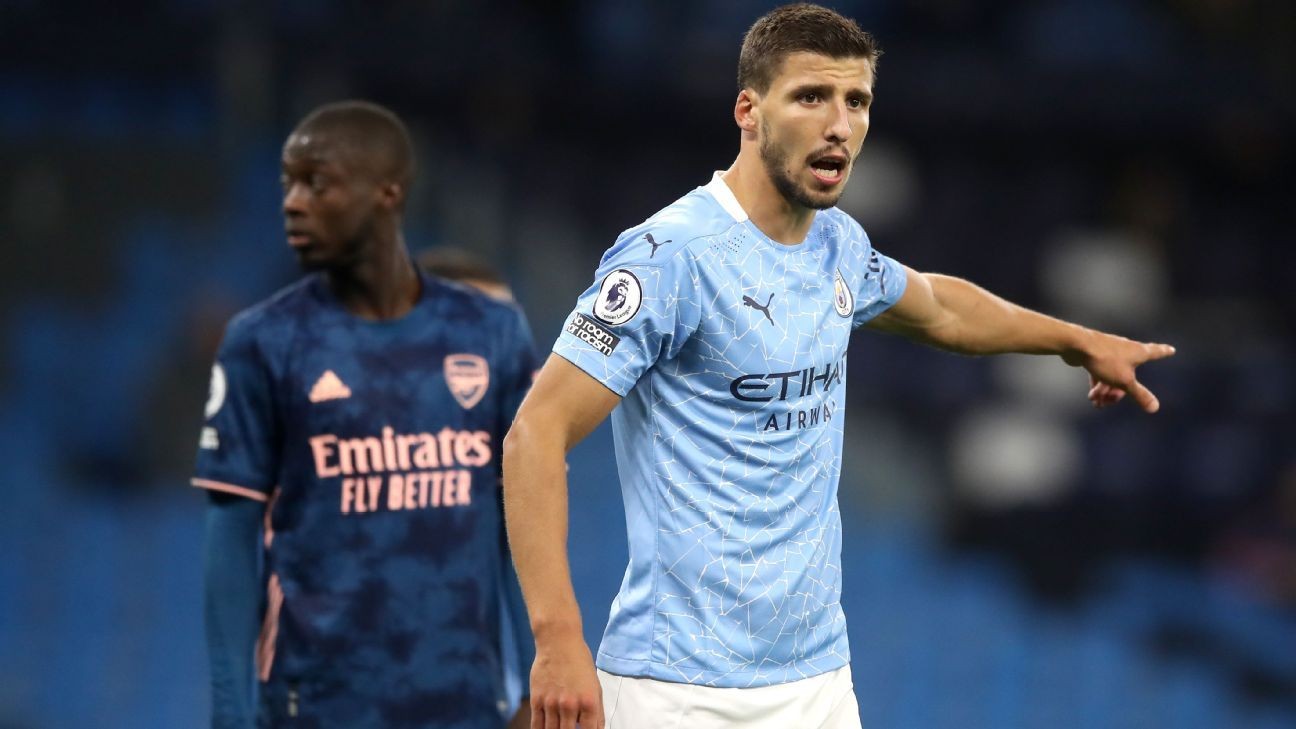 As widely anticipated, Manchester City ended up signing centre-backs during the past transfer period. Nathan Ake was an addition to help with defensive depth; long after his arrival, most people still expected more in order to mitigate Pep Guardiola's well-documented defensive headaches. Yet in came 23-year-old Ruben Dias. Can the 68 million euro signing from Benfica successfully galvanise Manchester City's back four?

Guardiola wasted no time in giving the Portuguese international his Premier League debut; just half a week after officially joining the club, Dias played the full 90 minutes in the 1-1 away draw at Leeds United. He also played the full 90 on Saturday as Man City worked their way to a comfortable 1-0 win at home to Arsenal.

Even with barely a dozen hours on the training ground with his new teammates under his belt, he slotted in quite comfortably to the right of Aymeric Laporte. Since then he has also enjoyed three outings for his country, all without conceding a goal: He was a half-time substitute in the 0-0 friendly draw against Spain, then started the Nations League games vs. France (0-0) and Sweden (a 3-0 win).

Despite being only 23 and a centre-back -- it usually takes longer to assimilate at what is generally considered to be the most difficult position in soccer to master -- Ruben Dias has already had an eventful young career in Portugal. After standing out at youth level and captaining his country for both the U-17 and U-19s, he has already established himself as a regular for the senior side. He was a member of the 2018 World Cup squad, and although he didn't play a single minute in Russia, he started the UEFA Nations Cup final a year later and played an outstanding match as Portugal beat the Netherlands 1-0 to claim the inaugural trophy.

Since then he has amassed a total of 22 senior caps for his country. The fact that Ruben Dias also clocked close to 100 league matches for Benfica -- roughly double what Victor Lindelof managed for the same club before he set off for Old Trafford -- prior to moving to the Premier League means that he does have an unusually high level of experience for a centre-back of his age, and this shows in the way he presents himself on the pitch.

Dias has played two league games for Man City and shown no signs of being fazed by the challenge of the Premier League. Martin Rickett/PA Images via Getty Images

The new Manchester City recruit's most striking feature is his composure; he never seems in a hurry. When in possession he's calm and measured on the ball, often taking time to look up and assess his passing options behind the lines in front of him. It's rare that he goes for the easy option of sliding the ball out to the full-back or his central defensive partner. He also has a fine touch on the ball, both when it comes to controlling it (even under pressure) and when hitting a well-weighted pass, often at the most convenient spot for a teammate to receive it.

Defensively, he's equally calm without the ball. In one-on-one situations he reads the opponents and tends to stay on his feet, preferring to wait out the situation by using his body to brush off the opposing player or nicking the ball with a well-timed interception rather than throwing himself into a risky tackle.

As already seen in his City debut at Elland Road and Saturday's 1-0 win over Arsenal, the occasional captain for former club Benfica also plays with the authority and assertiveness of someone well beyond his years. Although some would claim the empty seats at the traditionally hostile ground would've played to his advantage -- I have doubts that it would have made any difference to him -- he didn't look particularly fazed by being introduced to a league that's a lot more intense in terms of tempo and duels than the Portuguese Primeira Liga. Another crucial feature worth mentioning is the impressive focus he tends to carry with him all through the game.

If you add the size and presence to dominate in the air at defensive and attacking set-pieces, plus a relatively (at least for a central defender) agile body -- he appears reasonably quick once he hits top speed -- Ruben Dias makes up a fairly complete centre-back, and there's every reason to believe he will keep developing. Only time will tell whether the new signing is the long-term defensive rock to consistently partner Aymeric Laporte (obviously provided the Frenchman stays fit, too) in the heart of the Man City defence, but the early signs are promising and the pair look a good match.