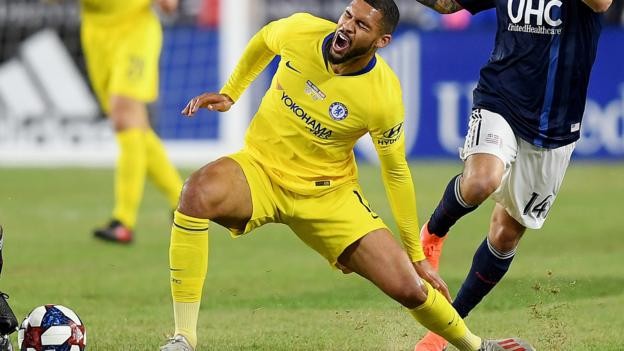 Chelsea midfielder Ruben Loftus-Cheek could miss the Europa League final after sustaining an ankle injury during a charity friendly in the USA.

The 23-year-old went down clutching his left ankle in the first half of Chelsea's 3-0 win over New England Revolution at Gillette Stadium.

Ross Barkley scored twice either side of an Olivier Giroud header in the comfortable win in Foxborough.

Chelsea play Arsenal in the final in Baku on Wednesday, 29 May.

Loftus-Cheek scored in the second leg of the Blues' Europa League semi-final against Eintracht Frankfurt and has been directly involved in nine goals in his past 15 competitive appearances for Chelsea.

Prior to the game, Chelsea manager Maurizio Sarri had expressed his concerns about travelling to the US so close to a major European final.