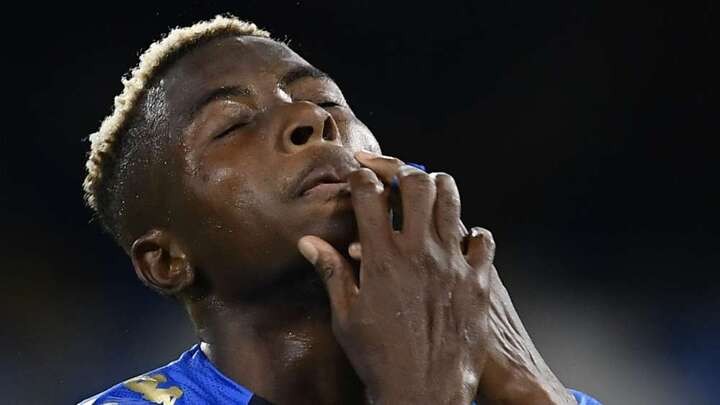 Lille have released three out of the four players that Napoli had included as part of Victor Osimhen's deal to move to Naples last year.

Goal understands that youngsters Claudio Manzi, Ciro Palmieri and Luigi Liguori were released by the French Ligue 1 champions on Monday.

The trio was added alongside goalkeeper Orestis Karnezis to sweeten Napoli's €80 million offer to lure Osimhen away from the Stade Pierre Mauroy.

Barcelona have fixed Sunday as the deadline to sort Ilaix Moriba's contract renewal saga, according to Mundo Deportivo.

The Spanish giants have been locked in contract talks with the Guinea-born midfielder in the past few weeks and they are yet to receive a response to the new offer they gave him last Wednesday.

Barcelona reduced the length of the new contract from five to three seasons which gives the 18-year-old a chance to renegotiate the deal in 2024.

The Rossoneri confirmed that Jane who joined the Rossoneri in 2019, signed a one-year extension on Monday.

She has played a total of 39 matches in all competitions so far for the Italian club.

Olivier Giroud said it would be nice for him to reunite with his former Chelsea teammate Hakim Ziyech at San Siro Stadium.

The France striker left Stamford Bridge last month and Ziyech is being considered to fill the void left by Hakan Calhanoglu’s departure following his switch to rivals Inter Milan.

Crystal Palace are looking to sign RB Leipzig forward Ademola Lookman on a season-long loan, according to the Sun.

Leipzig are said to be demanding £3.5million as a loan fee for Lookman who earns about £50,000 per week at the club.

After spending last season on loan in the Premier League with Fulham, the Nigerian descent is reportedly attracting interest from Burnley and Watford as well.

Anderlecht are in pole position to sign Bayern Munich forward Joshua Zirkzee on loan this summer.

Sport 1 reports that the Belgian First Division A club is in need of a striker and they have the best cards to beat Hellas Verona in the race.

Verona are also looking to bring the Nigerian descent back to the Serie A despite his underwhelming outing at Parma last term.

Either Lyon or Nice could have signed Villarreal striker Boulaye Dia before he left Reims this month.

According to his agent Frederic Guerra, the Ligue 1 clubs were interested in the Senegal international but Villarreal moved fast to complete the €15 million deal and handed him a five-year contract.

"I first proposed him to OL, that's normal. Without success. Galtier wanted him, but as his formalization in Nice was delayed, Villarreal were quicker to engage him at 15 million. This is business,” Guerra was quoted as saying by Foot Mercato .

The Rossoneri are hoping to get a deal over the line for the Morocco international who they consider as the best replacement for Hakan Calhanoglu after his switch to city rivals Inter.

AC Milan seem to have struck a good relationship with the Blues after they signed two players from Thomas Tuchel’s team this summer – Olivier Giroud and Fikayo Tomori.

Bordeaux are close to reaching an agreement with RB Salzburg for the signing of Ghana left-back Gideon Mensah, reports Fabrizio Romano .

The deal is said to be an initial loan which comes with the option to buy.

Mensah spent last season on loan at Vitoria de Guimaraes and he could become Gerard Lopez's first signing of the summer.

Eric Bailly is expected to meet with the management of Manchester United over his future at the club after they reached a deal with Real Madrid for Raphael Varane.

According to ESPN , the Ivory Coast defender will seek clarification after the Tokyo 2020 Olympics where he is currently playing for the Elephants.

Bailly has been at Old Trafford since 2016, and he recently extended his contract until 2024 with the option of another year.

Rennes striker Mbaye Niang has reached an agreement with Serie A new boys Venezia, according to Sky Italia .

Both clubs had their agreement with the 26-year-old set to complete an initial loan move which comes with a purchase option.

Niang reportedly attracted interest from Anderlecht and Celtic as well, but he is now set for a return to Italy where he previously played for Torino and AC Milan

According to Liverpool Echo , Hearts have submitted an offer for the DR Congo-born star who spent the second half of last season on loan at Derby County.

Baningime, who is in the final year of his contract with the Toffees, looks set for a new adventure elsewhere after he was disappointingly dropped from Rafael Benitez's side in the pre-season trip to Florida.

AC Milan are prepared to give Franck Kessie a salary of €6 million per year in an attempt to keep him at the club beyond 2022, according to La Gazzetta dello Sport .

The Rossoneri are expected to meet the Ivory Coast international's representatives during the week and the new offer could be for two years with another term of agreement to be discussed in a year.

Kessie is currently on a €2.2m-per-year contract at the San Siro Stadium which expires in June 2022, and he is reportedly attracting interest from Liverpool.

Paris Saint-Germain have held a meeting with Kalidou Koulibaly's agent Fali Ramadani as they aim to lure him to Parc des Princes.

According to Il Corriere dello Sport , the meeting had PSG director Leonardo in attendance but Napoli are yet to receive any official bid for the Seneal captain.

Koulibaly moved to Naples in a €7 million deal from Genk in 2014.

Leicester City’s Rachid Ghezzal has agreed to sign a three-year deal with the option of an additional year with Besiktas.

A Spor reports that the Turkish Super Lig champions are keen on keeping the Algeria international after his impressive loan spell last season, and they offered him an annual salary of €2.2 million with Champions League bonus.

Despite the agreement with the player, Besiktas are still locked in talks with the Foxes and his transfer fee is expected to be around €3.5m.

Geoffrey Kondogbia is unhappy with his debut season at Atletico Madrid because of his limited playing time, according to Marca .

The Central African Republic international was signed as a replacement for Thomas Partey last year but he was restricted to just 774 minutes of football in the 2020-21 season.

The report added that the former Valencia midfielder is ready to consider his future at the club if the situation does not change in the new season.