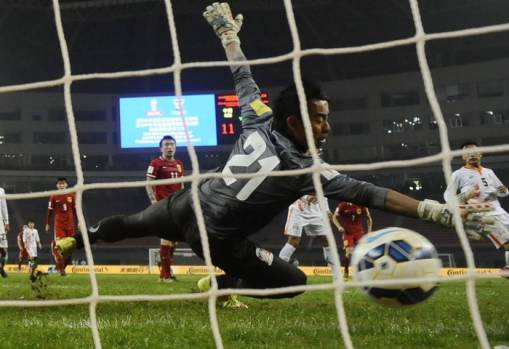 Kuala Lumpur: Despite there only being two rounds left to go in the 2018 FIFA World Cup/2019 Asian Cup joint-qualifiers, there is still plenty to play for in each of groups.

Eight group winners will advance to the third round of the World Cup qualifiers, as well as straight to the 2019 Asian Cup in United Arab Emirates, along with the four best runners-up.

The other four runners-up will progress to the third round of qualifying for the Asian Cup, along with all the third-placed teams and the four best fourth-placed teams.

Finally, the remaining sides will have to negotiate past two rounds of playoffs for one of the final eight spots in the Asian Cup third qualifying round.

Here, the-afc.com digests the qualifying scenario from Group A to H ahead of the crucial clashes on March 24 and 29.

Saudi Arabia are currently in pole position and can wrap up top spot on March 24 with just a draw against Malaysia, who have already conceded 16 goals in their two previous trips to the West against United Arab Emirates and Palestine.

On the same day, UAE can also seal a top-two berth against Palestine, who are only four points behind their opponents.

Victory for the UAE would also move them into the top four in the rankings of the runner-up teams, but failure to do so would leave them in a tricky situation as they finish their campaign against the Saudis on March 29, while Palestine have what appears to be a far more straightforward tie against bottom side Timor-Leste.

Barring a shock victory over Saudi Arabia, Malaysia look set to have to settle for a place in the qualifying playoffs even if they finish above Timor-Leste, as they are currently bottom in the ranking of fourth-placed teams.

Things are extremely tight in Group B with only four points separating the top three, although reigning AFC Asian Cup champions Australia currently lead the way in top spot, two ahead of Jordan and a further two in front of Kyrgyzstan.

With the Socceroos and the Jordanians expected to claim victories over Tajikistan and Bangladesh respectively on March 24, top spot could only be decided five days later when the two teams meet in in Sydney.

Wins for two front-runners in the first round of qualifiers would also end Kyrgyzstan’s hopes of a top-two finish, and they would then have little to play for in their final qualifier against Tajikistan with their place in the Asian Cup third qualifying round already in the bag.

The Tajiks would be hoping to pounce on any complacency that creeps in when they meet Kyrgyzstan on March 29, especially given they are currently in the running to be one of the four best fourth-placed teams.

With two games still to play, Qatar are already assured of top spot after six straight wins, but will be looking to finish off with a perfect streak by beating both Hong Kong and China.

Should Hong Kong lose to Qatar on March 24, they could find themselves replaced in second place should China beat Maldives, given their rivals have a far superior goal difference following a couple of 0-0 draws in the meetings between the two sides.

The Chinese will also be looking to pile on the goals against Maldives before a tougher test against Qatar in order to give themselves every chance of being one of the four best runners-up, should they ultimately finish in second spot.

At the other end of the table, unless the Maldivians spring a surprise against China, they are likely to have to go through the qualifying play-offs even if they beat Bhutan on March 29.

Currently in pole position with a three-point lead, Iran are on course to finish top of Group D and can move one step closer with victory over India on March 24.

Nevertheless, in the event that Oman beat Guam on the same day, the battle for first place will then go down to the wire with Iran and the Omanis facing off in Tehran five days later having played out a 1-1 draw in their earlier meeting.

That scenario would also end any hopes third-placed Turkmenistan have of creeping into the top two, although they have already sealed their berth in the Asian Cup third qualifying round.

Meanwhile, Guam – who have arguably been the surprise package of the qualifiers thus far – are currently the best-ranked fourth-placed team and could be hard to dislodge from the top four, even if they are beaten by Oman in their final qualifier.

There is still a slim possibility they could drop to fifth in Group D, in the unlikely event that bottom-placed India beat both Iran and Turkmenistan over the next week.

The race for top spot in Group E is set to go down to the wire as Japan lead Syria by a solitary point with two games remaining.

Should the two teams see off Afghanistan and Cambodia respectively on March 24, both would then face offfive days later in in Saitama in an outright duel for first place.

Still, their excellent results throughout the campaign thus far should be enough for either of them to advance to the next round of World Cup qualifiers, as well as seal an automatic berth at the Asian Cup, even if they finish second, with Syria currently top in the ranking of runner-up teams.

Barring an Afghanistan upset over the Japanese, Singapore’s position in third place looks safe, meaning the former will have to finish as one of the four best fourth-placed teams in order to avoid the qualifying play-offs for the third round of the Asian Cup.

Thailand are bidding to appear at the Asian Cup for the first time since 2007 and, with four wins and a draw to their names currently, can secure their participation as long as they avoid defeat to second-placed Iraq onMarch 24.

Should the Iraqis emerge triumphant, they can then go on to pip the War Elephants to top spot with a win over Vietnam five days later.

Even if Iraq do fail to do so, they could still make the next stage of World Cup qualifiers as they are currently one of the four best runners-up, just ahead of Hong Kong in the rankings.

Third-placed Vietnam are already guaranteed a spot in the third qualifying round of the Asian Cup but are not out of the running of a top-two finish just yet, which they could achieve if they can beat both Chinese Taipei and Iraq.

Indonesia’s disqualification also means that Chinese Taipei will finish no lower than fourth, although the fact that they are yet to pick up any points is likely to still send them to the qualifying playoffs.

Given the ban currently imposed by FIFA on Kuwait, the situation in Group G is slightly uncertain although Korea Republic will definitely finish in first place, having won all six of their matches so far to sit eight points clear of their closest challengers.

With the Kuwaitis’ two qualifiers not taking place this week, the door has been opened for third-placed Lebanon to climb into the top two, which they will achieve even with a point from their two qualifiers.

It will, however, not be easy against the South Koreans, who are looking to extend their perfect run, as well as Myanmar, who are currently in the running to to be one of the four best fourth-placed teams.

Meanwhile, bottom-placed Laos will have to go through the qualifying playoffs having picked up just one point from their seven matches.

As things stand, DPR Korea are currently out in front in Group H but, with a slender one-point advantage, are coming under serious pressure from second-placed Uzbekistan.

With DPR Korea not in action until March 29, Uzbekistan could overtake them five days earlier with a victory over Philippines and another three points against Bahrain in their final qualifier would be enough to seal top spot.

As things stand, the Uzbeks would still advance to the AFC Asian Cup, and the next round of World Cup qualifiers, as one of the four best runners-up.

Elsewhere in the group, Philippines will be looking to hold off the Bahrainis in third place but two tricky ties against Uzbekistan and DPR Korea, and are likely to need a result if they are to maintain their one-point buffer. There is also a mathematical possibility Yemen could move into fourth spot if they beat Bahrain on March 24, although their poor record means it is almost certain they will have to go through the qualifying playoffs either way.