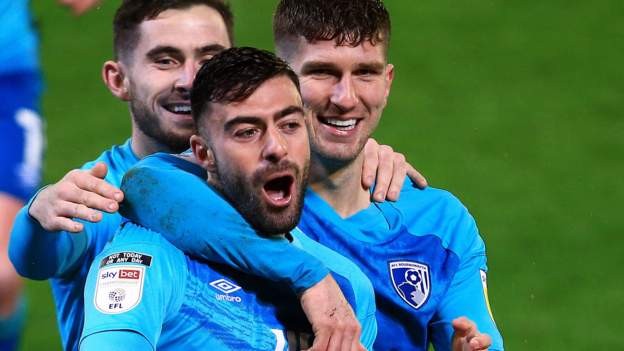 Dominic Solanke scored his sixth Championship goal of the season

Bournemouth moved to the top of the Championship as two goals in each half saw them ruthlessly defeat Barnsley.

In an open game with several chances at both ends, the Cherries led when Philip Billing found the bottom corner with a low strike from 20 yards.

The hosts should have levelled, but defender Mads Andersen could not sort out his feet in time to divert Michal Helik's effort in from two yards, and were punished as Dominic Solanke doubled Bournemouth's lead with a run and near-post finish on the stroke of half-time.

Diego Rico made it 3-0 with a fine free-kick which caught out Barnsley keeper Jack Walton - who expected a cross - with Sam Surridge capitalising on an error to complete the scoring with a shot that Walton should have kept out.

Victory moves Jason Tindall's side two points clear of Norwich, who will regain top spot if they beat Sheffield Wednesday on Saturday.

Barnsley, meanwhile, drop a place to 15th as their goal difference took a dent at Oakwell against a Bournemouth side displaying the clinical edge they lacked in the Premier League last season.

The Cherries should have led in the opening minute but Surridge shot wide with an open goal, albeit at an angle, after beating the onrushing Walton to a ball into the channel.

Alex Mowatt forced Asmir Begovic into a decent save from range as the Tykes carried a threat, but they gave Denmark midfielder Billing too much space to pick his spot for the opener after Adam Smith had carried the ball forward for the visitors.

In many ways Valerien Ismael's Barnsley were architects of their own downfall - striker Cauley Woodrow gave the ball away in his own half for Solanke's well-taken second, Andersen conceded a needless free-kick which led to Bournemouth's third and Herbie Kane inexplicably played in Surridge with a wayward pass which was also duly punished.

A Woodrow snapshot was tipped wide by Begovic and Luke Thomas curled wide as the home side threatened from outside the box in the second half but Bournemouth - now the Championship's joint leading scorers with 29 goals alongside Blackburn - kept their first away clean sheet since winning 1-0 at Chelsea in December 2019.

Romal Palmer (Barnsley) wins a free kick in the attacking half.

Michael Sollbauer (Barnsley) is shown the yellow card for a bad foul.

Sam Surridge (Bournemouth) wins a free kick in the attacking half.

Attempt missed. Alex Mowatt (Barnsley) left footed shot from outside the box is close, but misses to the right. Assisted by Callum Brittain.

Attempt saved. Rodrigo Riquelme (Bournemouth) right footed shot from the right side of the box is saved in the bottom right corner. Assisted by Adam Smith.

Dan Gosling (Bournemouth) wins a free kick in the defensive half.

Louis Theroux is back: I May Destroy You star Michaela Coel joins for his new seriesHarry Kane exclusive: The England captain talks VAR, fans returning and Justin Bieber