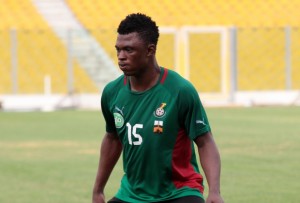 South African side Mamelodi Sundowns have issued a press statement to congratulate defender Rashid Sumaila on his selection to the Ghana national team for the 2014 FIFA World Cup.

Sumaila, who started his PSL career on a high with regular game time after joining Sundowns at the start of this past season, was relegated to the bench following the arrival of Thabo Nthethe at the Chloorkop outfit.

The Ghanaian proved his worth with fine performances whenever he was given a chance in Pitso Mosimaneâ€™s team in the 2013/14 campaign.

Sumaila made 17 league starts for Sundowns during the teamâ€™s championship-winning season.

â€œMamelodi Sundowns have congratulated defender Rashid Sumaila who has been named in Ghanaâ€™s 23 man squad for the 2014 FIFA World Cup in Brazil," the club said on its official website.

"The tough tackling 21 year old who joined The Brazilians in 2013 was instrumental in Sundownsâ€™ successful 2013/14 season and quickly earned the respect of his peers and opponents alike for his no-nonsense defending and well-timed tackles."

"Ghana are pitted in group G against Germany, Portugal and the United States of America,â€

Orlando Pirates goalkeeper, Fatau Dauda, is another Ghanaian player plying his trade in the PSL that has been included in Kwesi Appiahâ€™s side for the worldâ€™s prestigious football tournament.