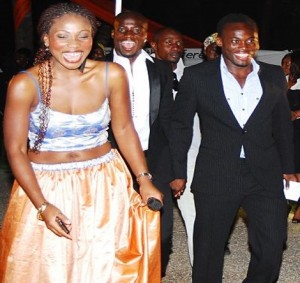 The Real Madrid star had planned the marriage to his Ghanaian sweetheart at an exclusive venue in Weybridge on Monday but alarm blew on the secret wedding as Sundayâ€™s sabotage of his clubâ€™s game hit the wedding plans.

The postponement of Real Madrid's game at Rayo Vallecano due to a presumed act of sabotage that left Vallecas stadium insufficiently well lit, means the match will now be played on Monday night.

Several celebrities from Ghana, England, Italy, France, Spain and China who were invited for the event are being told of a new date for the BIG wedding as Real Madridâ€™s clash at Rayo Vallecano has been postponed until Monday evening.

Coach Jose Mourinho as well as many Real Madrid players and management were scheduled to attend the wedding along with Chelsea stars Ashley Cole, Frank Lampard, Mikel Obi and many others, GHANAsoccernet.com understands.

Ghanaian stars Stephen Appiah, Sulley Muntari and many African players in England like Emmanuel Adebayor were all billed to attend the wedding with some coming from as far as China and France, sources have told GHANAsoccernet.com.

Electricians tried and failed to repair the damage caused by what Rayo president Raul Martin Presa called "vandals" who had "cut the wiring" on some of the stadiums light towers.

While there was no light at the stadium, the darkness threw some light on the wedding plans of Essien who has also remained private about his private affairs.

The revelation of the secret wedding has also crashed the hopes of many girls in Ghana, Spain, England and France who were hoping to tie down the hottest bachelor in the world.

The identity of Essienâ€™s to-be wife remains a top secret after some public falling out with two of his ex-girlfriends Nadia Buari and Dela Ackumey.

Keeping on reading GHANAsoccernet.com for updates on Essien's wedding and Â the identity of his wife-to-be.