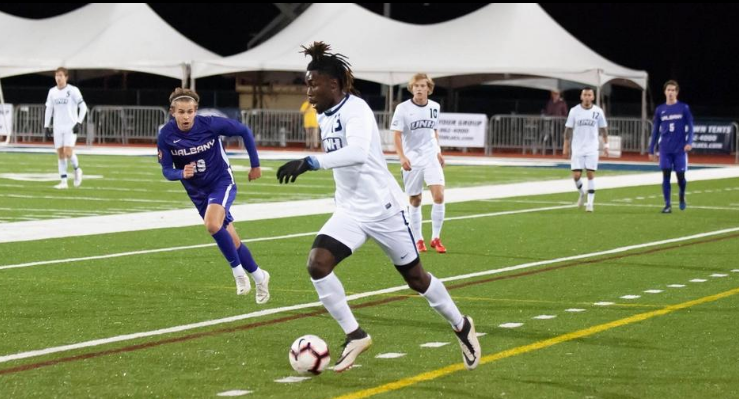 University of New Hampshire senior forward Donnett Sackie undoubtedly wants to be “the best player in the world.”

Though, his passion doesn’t burn for the fame and fortune like most. His drive comes from the family and supporters he left back home in Liberia to pursue his career.

Now in his final season as a Wildcat on the No. 18 UNH men’s soccer team, Sackie leaves it all on the field to show he has what it takes to play at the next level and support his family. He describes his love for the game as an escape from the tragic reality he found himself in at a young age, which included him being sent to a camp in Ghana as his family was seeking asylum from war-torn West Africa.

That American, Max Reisman, had traveled with a group called Children’s Better Way, an organization that Sackie said “sent American people to help with medicine, water or food.”

Given his advanced talent, Sackie liked to be challenged by the older kids in the camp. As his drive and passion for the game heightened, he became the one that everyone looked to as a leader.

So lead he did. As a 12-year-old war refugee, he coached other refugees ranging up to four years older than him.

“We played a lot, and I saw other kids come around and they’d watch. But there was no leadership, so since they thought I was a good soccer player and would listen, I thought, why not form a team?” Sackie said. “Max brought his camera and we took pictures in our torn cloth jerseys.

“I really just wanted to create an environment for kids to feel safe, like I felt safe, and just be happy.”

Since his days coaching youth refugees, Sackie has traveled over 8,000 miles to chase his dream of being a soccer star. He started both his formal education and organized soccer careers in Ghana, after working odd jobs to afford tuition and fees.

Sackie and his family moved back to Liberia soon after, leading to his introduction to Kristi Manning, director of the Strongheart Fellowship.

With Sackie’s admittance to the Strongheart facility he was presented with the opportunity to meet people from around the world, leading to a soccer scholarship to Wasatch Academy, a prep school in Utah, in 2013.

Like he had done so many times throughout his youth, Sackie packed up his clothes and his life and moved to Utah.

“I was so excited to come here,” Sackie said. “When I got on the plane and landed here everything changed.”

When asked about the adjustment, Sackie explained the difficulties he faced: “I almost fell on the escalator at the airport, it was really difficult. Coming here changed my perspective. I wrote my first essay at Wasatch in the 11th grade. The education system is so different than Liberia. I knew this was the land of opportunity.”

Sackie wasted no time making his talent known, scoring five goals in his first game as a Tiger. He would go on to lead the team to a regional championship with 21 goals in 13 games.

His varsity performance earned him several collegiate offers, though he decided to accept Utah Valley University’s offer in 2015.

“That was [Utah Valley’s] first year in Division I, they were trying to make history, and for me I like to be a part of history,” Sackie said. “It felt like home.”

In his freshman season Sackie scored one goal in one start and 14 appearances, an adjustment coming off a 21-goal season.

After not starting any games in his sophomore season, Sackie put his collegiate career and experience on hold to play for the Seacoast United Phantoms. While in the Premier Development League, Sackie padded his statistics with 11 goals in 13 games.

Impressed with his athleticism, coach Marc Hubbard and the UNH men’s soccer program extended a roster spot to Sackie for his final two years of NCAA eligibility.

Hubbard took full advantage of Sackie’s talent, starting him in 13 of 18 games. Sackie helped the Cats win the America East Championship in his first year in Durham.

With his final season of collegiate soccer underway, Sackie and the Wildcats are off to a 5-0-2 start, with Sackie starting five of the games and scoring in their win against Providence and draw to Syracuse.

With his sister facing the fast-tracked childhood that he did, Sackie leaves it all on the field each and every game, hoping to provide similar opportunities for her.

“There’s been no physical progress getting her here, but I think I’m making progress,” Sackie said. “Once I get a job in the U.S. playing soccer then I can find a way to get her in school out here. There’s nothing I can do right now, but in the long run I would love to get her in school somewhere; education is what we all need.”

Despite only being able to talk to his family every few days through Facebook, Sackie is doing everything in his power to make it to the next level, letting his dream of being the best player and helping his sister guide him.