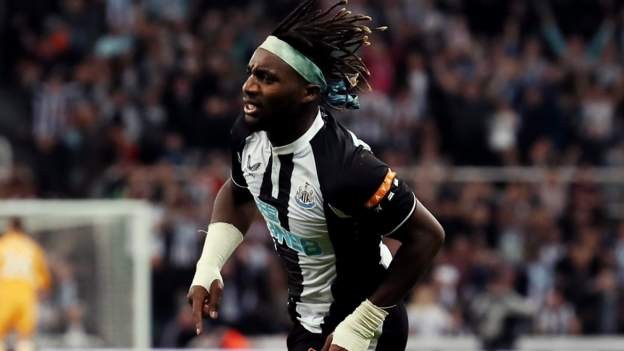 Allan Saint-Maximin scored a minute before the break

Allan Saint-Maximin's fine equaliser lifted the pressure on Newcastle boss Steve Bruce as his side earned a point against Leeds.

After a week when Bruce had to defend his position following further criticism from fans, the mood turned ugly inside a packed St James' Park when Raphinha cut in from the right and sent his cross into the far corner of Karl Darlow's goal after 13 minutes.

As Leeds threatened to run riot against a disjointed Newcastle, "we want Brucey out" was sung by all sides of the stadium.

Marcelo Bielsa's free-spirited side should have been further ahead before the break, but after Matt Ritchie hit a post, Saint-Maximin lifted the mood when he danced around the Leeds defence before finding the bottom corner.

It was a massive goal for both Newcastle and Bruce, who punched the air in delight, and restored some equilibrium after a torrid first half.

There was less stress for Bruce after the break as Newcastle switched to four at the back and Saint-Maximin twice tested Illan Meslier in the Leeds goal.

The result left both sides still searching for their first win of the season, and at the wrong end of the table.

But a point kept Bruce's head above water even if there will still calls for him to leave the club as the game finished. As the 60-year-old headed down the tunnel, his face told the story of a man relieved for now but who faces an uphill task to turn the mood around.

After a week where Bruce declared that quitting was "not in my nature", this was an atmosphere which perhaps proved that his family was right to think he was "sick" for staying in the job.

It took only three minutes before a section sang "we want Brucey out" but as the hosts unravelled under Leeds' relentless counter-attacks, large sections of St James' Park made their feelings known.

In a frantic first half, where Leeds could have scored three or four goals, the atmosphere threatened to boil over.

Raphinha's opener was another stain on a defence who came into the match having conceded 13 goals, the most in the Premier League this season.

Karl Darlow returned in goal after being in hospital with Covid-19 and was called into action on several occasions, but Leeds still created plenty of opportunities with Raphinha, Daniel James, Mateusz Klich and Junior Firpo all going close.

A stressed Bruce winced on the sidelines. Despite Newcastle's defensive frailties, they still looked sharp in attack, with Saint-Maximin, playing up front, at the heart of their endeavour and in the end he proved a saviour.

A good break from the French forward led to Ritchie hitting the woodwork, and his goal before the break was transformative, although there was still time for Newcastle to almost concede again when Raphinha was guilty of missing when on his own in the opposition box.

A more sedate and equal second half suited Bruce and Newcastle, who were without last season's top scorer Callum Wilson, as the energy both sides showed in the first half dissipated.

Darlow, who replaced a struggling Freddie Woodman provided the extra assurance that the hosts needed, especially when he had to save from Jamaal Lascelles, who almost headed into his own net.

Saint-Maximin drew two equally fine stops from Meslier in the Leeds goal and created a fine chance for Joelinton, who fired over, to groans all around the ground.

Given that the first half could have been a lot worse for Newcastle and their under-fire boss, a point was a decent return and spoke of a good second-half recovery.

For Bielsa's side, it was their third draw of the season and although it is the first time they have gone five games without a win under the Argentine, there was plenty of encouragement that their form will improve.

The same might not be said for Newcastle, however, as "Bruce out" chants rang out and they collected only their second point of the season to remain 18th.

Rodrigo (Leeds United) wins a free kick in the defensive half.

Ryan Fraser (Newcastle United) wins a free kick in the attacking half.

Attempt saved. Mateusz Klich (Leeds United) left footed shot from outside the box is saved in the centre of the goal. Assisted by Tyler Roberts.

Liam Cooper (Leeds United) wins a free kick in the defensive half.

Attempt saved. Allan Saint-Maximin (Newcastle United) left footed shot from the centre of the box is saved in the bottom right corner.

Attempt missed. Jamaal Lascelles (Newcastle United) header from the centre of the box misses to the right. Assisted by Matt Ritchie with a cross following a corner.

Junior Firpo (Leeds United) is shown the yellow card for a bad foul.

Joseph Willock (Newcastle United) wins a free kick in the defensive half.