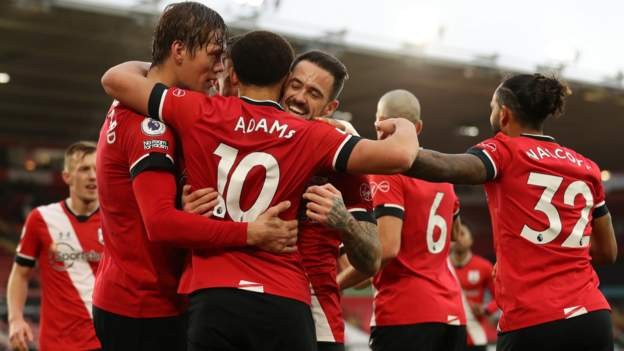 Che Adams pounced in the box to poke in the opener, Stuart Armstrong scored a deflected second, and Nathan Redmond came off the bench to add a delightful third.

Saints climb as high as third, at least until Leicester play later on Sunday, and are only a point behind top two Tottenham and Liverpool, who are also both still to play.

The season is only 12 games old, but Sheffield United's situation is looking increasingly dire. They still have only one point and will be at least six points from safety regardless of Sunday's other results.

No team in the Premier League era has had so few points at this stage of the season and gone on to avoid relegation.

In such a lofty position with almost a third of the season completed, and now with only one defeat in their past 10 games, it is right to consider what this accomplished Southampton team could achieve this term.

Their defence is organised, their midfield a combination of hard-working and creative, while front two Adams and Danny Ings are among the most potent attacking forces in the league.

Bar a brief period of Blades pressure at the beginning of the second half, when imposing centre-halves Jan Bednarek and Jannik Vertergaard were made to work hard, Saints controlled this game.

Oriel Romeu patrolled in front of the defence, James Ward-Prowse constantly teased with his delivery from set-pieces and Adams was a nuisance to the visiting back line.

Given their superiority, particularly in the first half, Southampton perhaps could have won by more, and it is true they had a helping hand for their first two goals.

The first came from some weak Sheffield United defending of a Ward-Prowse free-kick. Bednarek leapt with barely a challenge and, when the ball looped off his shoulder, former Blade Adams nipped in to hook past Aaron Ramsdale.

After riding the wave of United pressure, Saints swept forward for the second. Ings, making his first start since the beginning of November after a knee injury, cut in from the left to feed Armstrong, whose shot took a wicked deflection to wrong-foot Ramsdale.

With the lead doubled, relaxation came over the 2,000 fans returning to St Mary's, and Redmond's sweet curler after a one-two with Romeu was no more than Saints deserved.

If they were not already, Sheffield United are in severe danger of being cut adrift at the bottom of the table. Their winless run, going back to the end of last season, now stands at 15 games. Fourteen of those have been defeats.

On top of that, the impotency of a return of just five goals this term is matched only by Burnley.

Manager Chris Wilder shuffled his pack in search of a way to ignite his team. At 38 years 118 days, Phil Jagielka became the oldest outfield player to feature in the top flight this season. Billy Sharp started and was one of five different forwards to feature at some point in the game. Ethan Ampadu and Enda Stevens both returned from injury.

There was no obvious improvement in a first half during which the Blades lacked ambition and barely landed a glove on their hosts. Their timid approach was typified by the defending for Southampton's opener.

They at least found some thrust after the break, stretching the home defence and asking questions from a serious of corners - John Egan headed over with a good connection from John Fleck's delivery.

However, the Saints' second was a mortal blow from which there was never likely to be a recovery, and the Blades must find an instant and drastic turnaround if they are not to be bottom at Christmas.

Southampton look to continue their good form at Arsenal on Wednesday (18:00 GMT), while Sheffield United will once again look for a first win when they host Manchester United on Thursday (20:00).

Sheffield United are only the fourth side in the top four tiers of English football to have no more than one point from their opening 12 league games of a season, after Manchester United in 1930-31 (zero in the top flight), New Brighton in 1931-32 (one in the Third Division North) and Newport County in 1970-71 (one in the fourth tier).Southampton have earned 23 points in this season's Premier League - only in 2014-15 have they had more after their opening 12 matches of a campaign in the competition (26).The Blades are the seventh side to lose their opening six away games to a Premier League season, and the first since Crystal Palace in 2017-18.Sheffield United attempted just 74 passes in the first half against Southampton; the fewest by a team in the opening 45 minutes of a Premier League game since February 2007, which was also the Blades (67 v Blackburn).Southampton have won four of their six league games at St Mary's this season - it took them until their 14th home league match last season to earn their fourth home victory. Indeed, this was the Saints' biggest home league win since November 2017, when they beat Everton 4-1 under Mauricio Pellegrino.Adams has scored four goals in Southampton's 12 league games this season, as many as he scored in 30 Premier League appearances in 2019-20. All eight of his goals in the division have come since June when the competition resumed post-lockdown.Amstrong is one of three players to have scored four or more Premier League goals from outside the box in 2020. The other two are Southampton players - Ings with five and James Ward-Prowse with four.Jagielka was the oldest English outfield player to start a Premier League match since Paul Scholes for Manchester United against Swansea in May 2013 (38 years 177 days).

Ryan Bertrand (Southampton) wins a free kick in the defensive half.

Aaron Ramsdale (Sheffield United) wins a free kick in the defensive half.

Ethan Ampadu (Sheffield United) wins a free kick in the defensive half.

Ethan Ampadu (Sheffield United) wins a free kick in the defensive half.

Oriol Romeu (Southampton) wins a free kick in the defensive half.

Missed all the action from the Manchester derby and Saturday's goals? Match of the Day is streaming now