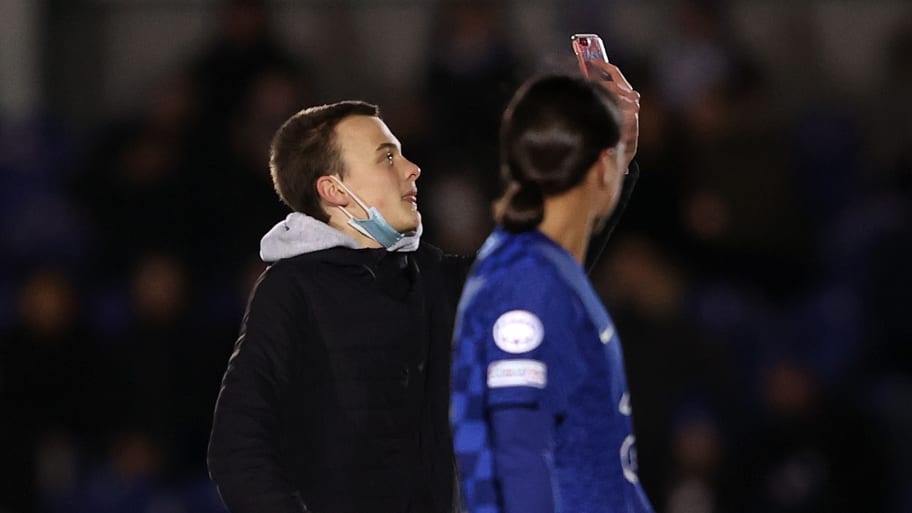 Chelsea Women star Sam Kerr was booked for shoulder-barging a pitch invader to the ground during her side's goalless draw with Juventus in the Champions League on Wednesday night.

The incident occurred towards the end of the game with the Australian receiving cheers from the Kingsmeadow crowd for her actions.

The pitch invader entered the field of play, filming himself while jogging around the turf. After being told to leave by Chelsea captain Magdalena Eriksson he was eventually barged over by Kerr.

While the crowd - and likely the players - were appreciative, referee Sara Persson was less impressed, with the Blues forward receiving a yellow card for her actions.

After the game Chelsea manager Emma Hayes did not see the funny side either, stressing that the incident proved that security needed to be beefed up in the future.

"We have seen in the growth of the game that there is this sense the players are more in demand," said Hayes.

"So I think it should serve as a reminder to us all and the stadiums and stewards that we have to put player protection first."

The incident capped off a frustrating night for Hayes' charges. A victory would have ensured progression to the quarter-finals. Now, they need at least a draw against a strong Wolfsburg side on the final matchday to progress.

Despite the blow, Chelsea have been enjoying an solid season so far. They currently trail WSL leaders Arsenal by just one point, having won seven games on the spin following their shock defeat to the Gunners on the opening day.

The Blues also got one over their London rivals in the delayed 2020/21 Women's FA Cup final recently, easing to a 3-0 win with Kerr netting a wonder strike to seal the victory.

This article was originally published on 90min as Sam Kerr booked for shoulder-barging pitch invader .