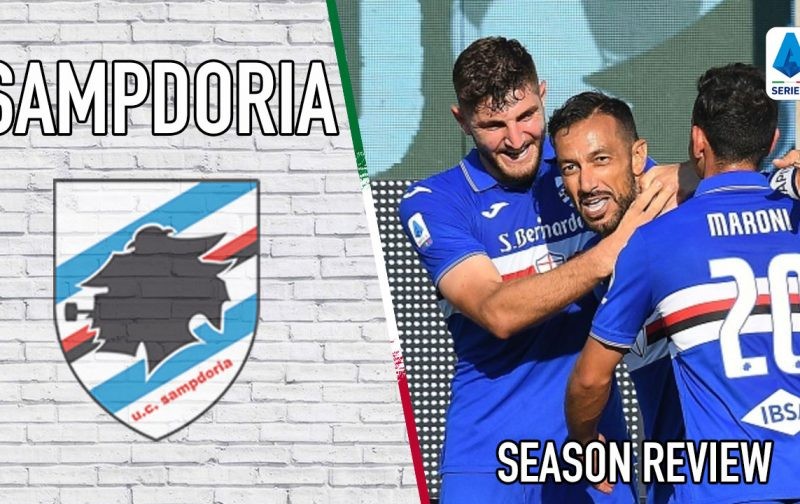 For Sampdoria supporters, the 2019/20 Serie A season will probably be one to forget and they will be relieved the club is still in Italy’s top flight.

The Blucerchiati had a nightmare start to the season under former Sassuolo and Roma tactician Eusebio Di Francesco, but his replacement Claudio Ranieri, who ironically took his place at the Giallorossi for the remainder of the 2018/19 season, guided the Genoese side to safety.

COVID-19 impacted the Doriani too, with at least five players as well as club doctor Amadeo Baldari contracting the virus, becoming one of the worst hit clubs in Italy. Sampdoria finished 15th at the conclusion of the 2019/20 Serie A season with 42 points, six places below where they had finished in the previous campaign.

Player of the Season: Karol Linetty Many players at Sampdoria struggled to sustain much consistency but the 25-year-old emerged as one of the on-field leaders for the Ligurian squad.

He had impressed in other seasons with his incredible work ethic, and more so than ever, demonstrated that he can protect his defence and also help out offensively in the construction of attacks. Linetty scored four goals and provided three assists in 28 league matches and he also wore the captain’s armband on two occasions. Sampdoria often have an ability to make shrewd acquisitions but most of the players they signed prior to the 2019/20 season were flops. One of the very few signings that made a positive impact was Norwegian midfielder Morten Thorsby, who displayed his great versatility in a number of positions.

The 24-year-old was signed from Dutch club Heerenveen on a free transfer in January 2019, then joining Il Doria in the summer, and he was used at right-back, right midfield, and as a box-to-box midfielder at Samp. Thorsby is a player that can run all game and also has neat ball control, demonstrating the ability to make the right passes and supply crosses. Under Di Francesco, Sampdoria suffered six defeats from their first seven games of the 2019/20 Serie A season, with a 1-0 victory against Torino in Round 4 being the minor exception. The former Roma coach was not backed properly in the transfer market and the squad could not function in his 4-3-3 formation nor his switch to 3-4-1-2.

Ranieri quickly lifted the team out of the relegation zone and the Blucerchiati hovered above the relegation throughout the season. A run of five wins from six matches when Serie A returned after the COVID-19 pandemic was enough to avoid the drop to Serie B. ‘The Tinkerman’ instilled confidence in the squad, tightened the defence, kept his game plan simple, and the team were able to function regardless if he used the 4-3-1-2, 4-4-2, or 4-4-1-1 formation.

In a season filled with lowlights, positive memories were rather scarce. Fabio Quagliarella is 37 years old so he probably hasn’t got many seasons left in him but 23-year-old Federico Bonazzoli seems to have inherited the Sampdoria captain’s ability to score outrageous goals.

Il Doria were 1-0 down against Udinese but came back to win 3-1 in their Round 32 encounter in Serie A and Bonazzoli scored the goal to put the Genoese team 2-1 up with a fabulous bicycle kick. Where can we start? Sampdoria fans had false hope when club legend Gianluca Vialli and York Capital Management wanted to acquire the Blucerchiati but they could not negotiate a price with president Massimo Ferrero and the deal was called off in October 2019.

In the summer of 2019, they made some terrible acquisitions such as Jeison Murillo from Valencia and Emiliano Rigoni from Zenit just to name a few and although Ranieri steadied the ship, Samp still suffered heavily defeats to Lazio, Fiorentina, and AC Milan.

Nothing can be worse that losing a city derby and La Samp lost 2-1 to Genoa in the Derby della Lanterna. The defeat in Round 35 was also the Blucerchiati’s first defeat in a derby since May 2016.