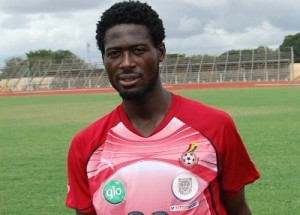 Medeama SC midfielder Sampson Cudjoe has been linked with Egyptian side Zamalek.

The 24-year-old was expected to join Algerian side Entente Setif but the latest twist is a move to the Cairo-based side.

Cudjoe spent last season at AshantiGold before signing a deal with Medeama.

He had a season's spell with Finnish side FC Honka in 2008 and played in the Uefa Europa Legaue qualifiers.