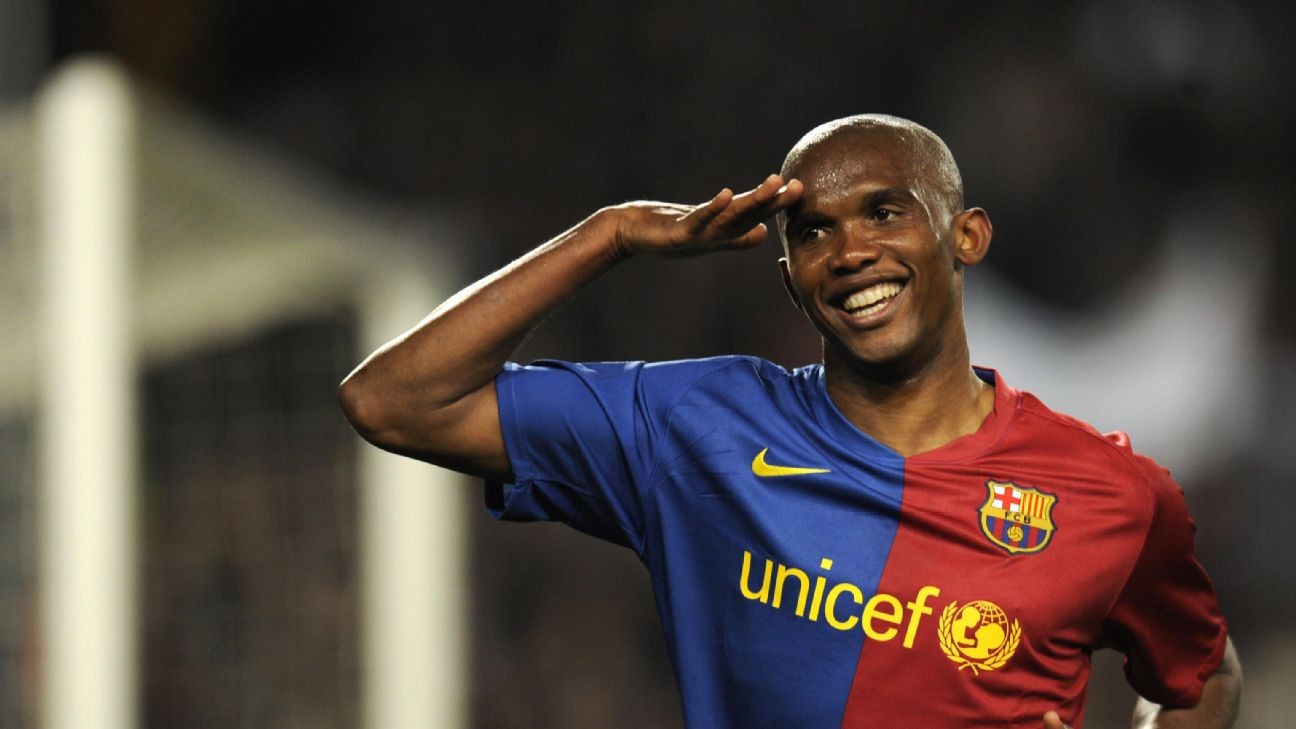 ESPN FC's Gab Marcotti discusses the actions that need to be taken after Inter Milan's Romelu Lukaku was subjected to racist chants at Cagliari.

Now that Samuel Eto'o has retired from football, debate will rage about whether or not he was the greatest African footballer of all time. In short, he was and by some margin.

What shouldn't be debated was that "Samu" (as most of his teammates knew him) was one of the most contrary, stubborn, volatile, fiercely competitive, determined, talented, agile and unstoppable footballers in living memory. Perhaps even all-time.

Some examples. The first time I interviewed him, Eto'o had already helped Barca win their first trophy for six years (La Liga in 2005), helped them retain that title a year later and won the Champions League in Paris against Arsenal. One of the questions for him was to list the top five achievements of his career. The absolute creme de la crème moments. And he looked at me straight in the eye with an "I dare you to contradict me!" expression while listing "joining Real Madrid" (three appearances) and "Winning the Champions League with Real Madrid" (53 minutes played across 1999-2000) as two of his five greatest achievements...

Plus, he didn't include anything to do with Barcelona despite his two La Liga medals, his flood of goals since moving to the Camp Nou or the Champions League final win a few weeks earlier where he'd actually scored to make it 1-1 vs. Arsenal. He was in a huff with Barcelona that day so he simply erased his current employers from his "my greatest moments" list.

This is a guy who ditched a Cameroon youth team tour of France, when he was only 11, and hid for seven months in his big sister's flat, not leaving during that entire time in case the police stopped him and asked for his (nonexistent) residence papers. Eventually, in spite of his indomitable will, he arranged to go home only to arrive back in France a couple of years later, illegally again, and stay secretively with his sister while arranging trials with football clubs around that country, all of which unsuccessful. Stubborn and determined.

Eto'o is, incidentally, the only man in the entire history of football to win back-to-back Trebles of the league, the national cup and the Champions League.  That he did it with two different clubs, one that had tried to toss him out the previous summer (Barca), and the other that had previously won the Champions League only twice during the competition's 55-year existence (Inter), makes the feat even more impressive.

What about another slightly personal anecdote in the list of Samuel Eto'os massive list of proud, aggressive, "winning" idiosyncrasies?

When we were filming the "Take The Ball, Pass The Ball" documentary in 2016, based on my book about Barcelona, an interview was agreed with Eto'o in Turkey on the occasion of a star-studded benefit match for his charitable foundation. By chance, the attempted military coup d'etat against the ruling government took place around the same time, which resulted in hundreds of casualties and, as you'd expect, the immediate cancellation of the event.

One of our producers, Marc Guillen and our cameraman, Victor Gros, were there for Eto'o's take on his single, volatile season under Pep Guardiola era. Initially, all planes were grounded because the military were bombing significant locations around Turkey. Then, suddenly, there was a window granted for some foreigners to exit the country. Private jets roared into the skies, with most of the stars who'd arrived early for the match naturally taking their chance to flee.

He insisted that before using this window of opportunity he "must" complete his commitment and speak to our camera crew. And he did. His interview is intense, funny, characterful and you'd never tell that the instant Marc called "cut!" Eto'o was up and off the couch as quickly as he's ever moved for a penalty box chance. I think his jet left about 15 minutes later. But he stayed, risking the chance of being stuck in Antalya and making sure we had what he'd promised. That's Samuel Eto'o.

Samuel Eto'o, despite not often getting the credit, was quietly one of the best players of his generation.

On the subject: I guess everyone remembers Guardiola arriving as manager at Camp Nou in 2008 and announcing he was giving Deco, Ronaldinho and Eto'o the boot. It caused a huge furore not just at the club but around Europe. Only Eto'o managed to avoid the cut, eventually hammering in 36 goals across all competitions in that single season under the Catalan boss.

After initially being shown the door, Eto'o stayed under Guardiola and became a central figure in helping Barca through the final knockout qualifying round for the competition itself, an ignominy the club hasn't suffered since. He scored in Guardiola's first Clasico. He accepted playing on the right wing to enable Guardiola's first 'Messi-as-false-nine' experiment in the 6-2 win at the Santiago Bernabeu and he scored the opening goal, from an improbable position, in the Champions League final against Manchester United.

All of these are known, if underestimated, parts of the Eto'o tapestry. What I think isn't known is how he managed to stay after Guardiola dropped the "Get out of town!" bombshell in his first news conference as manager.

In announcing Eto'o would stay, the young Catalan (who was about to rip up football history) said: "During the past month we've been together, I have been very pleased with his performance. I only have words of praise. His behaviour and attitude in Scotland and the United States [training camps] have made me decide that Eto'o will remain with us. And, as well as that, he is a player with immense talent."

What's not widely known is that the key trigger, during Barcelona's St. Andrew's training camp, was when the team captaincy group, helmed by Carles Puyol, Xavi and Andres Iniesta, went to Guardiola and said: "Look boss, we know what you've said and we know 'Samu' can be 'hard work' but he's going to be very useful to us if you'll keep him this season."

It wasn't a mutiny, nor a challenge to Guardiola's authority, but a hard pill for the incoming coach to swallow having committed himself publicly to the need to expunge problem players like the Cameroonian from the Camp Nou environment. The players won their argument and Eto'o seized his chance, but not many footballers generate a reverence among their teammates sufficient for them to risk and arguing with a new coach about extending his tenure. That's Eto'o.

Let's not forget either that Guardiola was the second Barcelona coach who tried to kick Eto'o out of the club. One day in training, one of Frank Rijkaard's assistants (legend says it was Johan Neeskens) failed to give an "offside" in a training ground match and Eto'o furiously grabbed him by the throat. Eto'o was expected to go but against the odds, as is his habit, he remained.

Samuel Eto'o became the first player ever to win back-to-back Trebles, achieving it with Barcelona and Inter Milan.

Then there was his belligerence towards racism. One of Eto'o's most-used phrases about his career was "I have to work like a black man to live like a white guy." He's never been scared of saying precisely what he believes with no reservations about controversy or consequences.

See Feb. 28, 2006, when Barcelona played at Zaragoza in the Copa del Rey. After suffering repeated monkey chants it was Eto'o, not Ronaldinho or any of the several players of colour on the pitch, who said: "No mas!" ("No more!") and took the unilateral decision to walk off the pitch in protest. It took extended and vehement persuasion from his teammates, notably Ronaldinho and, eventually, his manager Rijkaard, for Eto'o to eventually play on against his will. I think his actions were right and his cohorts were misguided.

Hit the racists, hurt them where they feel it. Eto'o had it right then, and only now are we beginning to see that.

Yet, and see this as a contradiction if you please, Eto'o was one of the quickest to staunchly defend Luis Aragones after he used derogatory terms about Thierry Henry, mentioning the colour of his skin, to try and shock a reaction out of the late Jose Antonio Reyes. Aragones was wrong, plain and simple. No ifs or buts. But Eto'o was certain he knew his old Mallorca coach better than this incident and firmly told anyone who asked that Aragones "wasn't racist... just Luis!"

With Eto'o, we are talking about a man who, in the early years of his career, steadily bought a fleet of old cars and shipped them back to Cameroon for friends and family to start jobs as taxi drivers and then checked up on them to make sure that they were working hard enough to make his generosity worthwhile. The man who stood in front of us in the Camp Nou mixed zone and, during one of his rare scoring droughts, described goals as "like rats: if you chase them they disappear up a drainpipe." Only Eto'o.

There's little in this appreciation about his time with Inter, Real Madrid (how Florentino Perez must rue losing him. In 20 matches against Madrid he lost only five times, scoring 11 goals.), Cameroon, with whom he won Olympic Gold, or his 11 other clubs.

But be clear about this: with Eto'o's retirement European and African football have lost one of the most superb, talented, athletic, clever, charismatic, quixotic, hot-tempered, big-mouthed, entertaining and most "winning" players we have seen or are likely to.

Tennis star Rafa Nadal recently said: "People get confused about talent. Talent isn't striking the ball well, or very hard. Some play beautifully, some flawlessly, others run brilliantly. But in all sport the final objective is to win. So, in summary, the person who wins the most is the one with the most talent"

Rafa knows. Samuel Eto'o knew. What a talent, what a winner. Adios "Samu!"