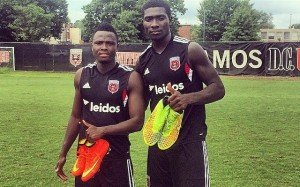 D.C. Unitedâ€™s newest defenders, Kofi Opare and Samuel Inkoom , have been teammates for all of three weeks, tossed into the late-season maelstrom of the MLS playoff race and international competition.

Opare arrived in a trade with Los Angeles at the end of July, Inkoom this month after five years and four clubs in Europe.

Although they had not met until becoming work colleagues, Opare and Inkoom have forged an immediate bond, linked by family and culture.

They were born in Ghana. Their families are friends in the seaside city of Winneba, and Inkoom is tight with Opareâ€™s cousin.

Upon Inkoomâ€™s arrival in Washington â€” and well before United announced the signing â€” Opare did a double take when he saw Inkoom in the locker room at RFK Stadium.

â€œI thought he looked really familiar but I couldnâ€™t place him,â€ Opare said this week. â€œI thought, â€˜Wow, is that him? This canâ€™t be right. Oh, it is.â€™ Itâ€™s a pretty small world.â€

Both were acquired to provide depth for a D.C. squad (14-9-5) that leads the Eastern Conference by two points with six matches left. United will visit the Chicago Fire (5-7-15) on Saturday night.

This past Tuesday, with a mix of regulars and reserves in the lineup, Opare and Inkoom were on the field together for the first time. They played 90 minutes â€” Opare at center back, Inkoom debuting at right back and later moving into midfield â€” during a 2-1 victory at Waterhouse (Jamaica) in the CONCACAF Champions League.

Both speak English, but to mask instructions from the Jamaicans, they conversed at times in Twi, a Ghanaian dialect.

â€œThe other guys made me feel comfortable when I arrived and I am just trying to pay that forward,â€ Opare said. â€œWe have a lot of common interests and conduct ourselves the same say, so I can reach him better than some of the other players.â€

Opare, who will turn 24 next month, left Ghana as an infant to live in Pretoria, South Africa. His mother is a physician, his father a university professor. The family later moved to Newark and Niagara Falls, Ontario.

He starred at the University of Michigan, played for the U.S. under-20 national team and was chosen by the Galaxy in the second round of the 2013 draft. Opare started six regular season games last year and five this season before United acquired him and a 2015 second-rounder in exchange for its high standing in the leagueâ€™s allocation order. L.A.â€™s plans to use it on U.S. midfielder Sacha Kljestan fell through.

Inkoom, 25, helped Ghana defeat Brazil for the 2009 Under-20 World Cup title and was a member of the Black Stars at the 2010 and â€™14 World Cups. In his Cup debut four years ago in South Africa, he was asked to contain U.S. attacker Landon Donovan during Ghanaâ€™s round-of-16 victory. He then started in the quarterfinal defeat to Uruguay.

After nurturing his skills in Ghana, Inkoom began his European career with Swiss club Basel before joining Dnipro in Ukraine on a $6.5 million transfer. At the height of his popularity, he was drawing suitors in the English Premier League.

In Ukraine, however, he fell out of favor with Coach Juande Ramos, a former Real Madrid boss, and was loaned to Bastia (France) in 2013 and Platanias (Greece) early this year.

Inkoom appeared on Unitedâ€™s radar after not appearing in any of Ghanaâ€™s three World Cup matches in Brazil.

His natural position is right back, and while he will provide cover for starter Sean Franklin, his short-term future might be on the wings. In Jamaica on Tuesday, he struggled defensively in the first half before Coach Ben Olsen nudged him into midfield. Inkoomâ€™s cross set up Fabian Espindolaâ€™s 50th-minute header for a two-goal lead.

Inkoomâ€™s lack of matches and training time â€” United is in the middle of its busiest stretch of games â€” exposed his rustiness.

â€œItâ€™s just a matter of us finding ways to get him involved and to understand who we are,â€ Olsen said. â€œItâ€™s been a little bit tough [because of the schedule]. We threw him into the fire, and he did fine.â€