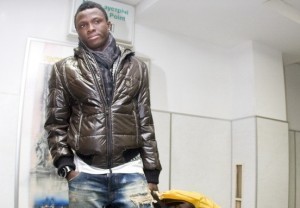 Ghana defender Samuel Inkoom has launched his personal website to aid his charity project for kids in Africa.

The 21-year-old right-back has posted his first released track on inkoom.info named INKOOM to be purchased by fans to make a donation for children in Africa.

Inkoom has details on his career which began at the CK Gyamfi Soccer Academy through to Hasaacas, Asante Kotoko and then to FC Basel in Switzerland.

He will follow in the footsteps of compatriots Stephen Appiah, Michael Essien, John Mensah and Sulley Muntari who have their personal portals.

The FC Dnipro player is country in Ghana on holidays and to prepare for the Africa Cup of Nations next month in Gabon and Equatorial Guinea.