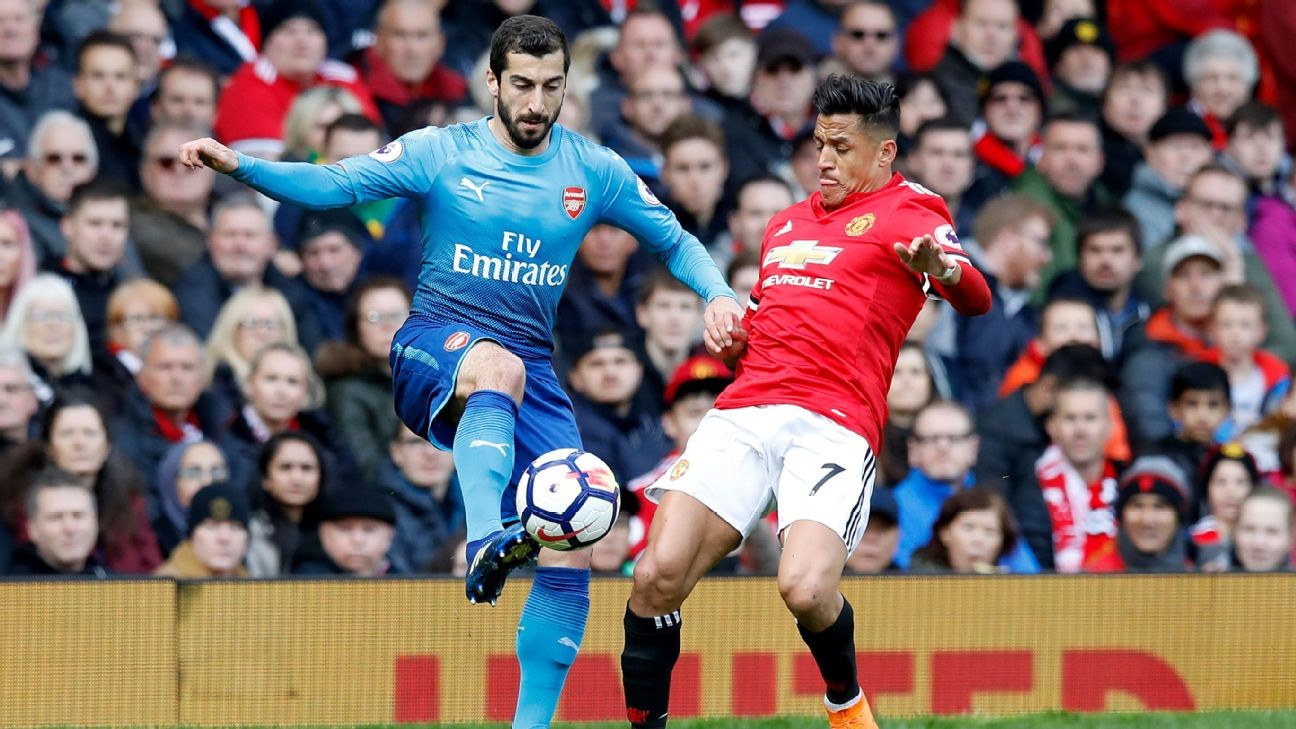 The warning has already come from football's biggest clubs. "I cannot help feeling that speculation around transfers of individual players for hundreds of millions of pounds this summer seems to ignore the realities that face the sport," warned Manchester United executive vice-chairman at a Fans' Forum event last month.

Barcelona president Josep Maria Bartomeu outlined what this new reality could look like. "This summer, there will be very little money in the transfer market," he said. "Clubs will have to do a lot of player exchanges to get deals done."

With all the various possible payment structures, contract clauses, intermediary fees and image rights, transfers involving just one player are often so remorselessly complex that throwing a second player into the mix usually proves a step too far. Consequently, even part-exchange deals -- player-plus-cash agreements -- remain rare. And the purest form, a straight player-for-player trade, is rarer still. Yet with money at a premium as a result of the coronavirus pandemic, exchanging players in cashless transactions has been mooted as the best way to navigate squad rebuilding in these unprecedented times.

Former Arsenal manager Arsene Wenger anticipated a surge in swap deals over two years ago, when completing the signing of Henrikh Mkhitaryan from United as Alexis Sanchez moved to Old Trafford in January 2018. The Frenchman, usually so prescient in his predictions, suggested convoluted contracts and an increasing willingness of players to run down their deals would lead to swaps becoming a more popular avenue for transfers.

As it turned out, the Sanchez/Mkhitaryan deal still stands today as the last significant swap in Premier League history. And instead of representing a template for clubs to follow this summer, it is a cautionary tale proving the old adage that two wrongs don't make a right.

THE SIGHT OF ALEXIS SANCHEZ playing a piano in his unveiling video raised several smiles among staff at Arsenal's London Colney training base. Sanchez had become so distant toward the end of his time in north London that he skipped commercial commitments and even stopped responding to internal operational club emails.

During the season, Arsenal have a monthly club day at which various sponsorship and commercial duties are fulfilled. Some players embrace the opportunity to play around in front of a camera; others are more reserved, but they all accept it as part of the workload expected of a modern footballer. Yet on one such occasion, in autumn 2017, Sanchez (along with Mesut Ozil) opted not to take part. It could have been interpreted as a minor indiscretion in isolation, but several other members of the squad believed it indicated an abdication of collective responsibility, a further widening of the cracks appearing in the squad.

By that stage, Sanchez and Ozil were bound together by their contractual situation. The two leading stars, both about to enter the final six months of their contracts, were asking for parity with the Premier League's leading wage earners before signing new deals. Arsenal's conservative approach to spending meant the standoff lasted for an eternity, casting a shadow over the club.

Sanchez had seen a move to Manchester City collapse in the 2017 summer transfer window and his head appeared to be elsewhere ever since. Although there were some staff members who sympathised with Sanchez, framing his mood swings as a misunderstood byproduct of Latin American flair, others viewed his public admonishment of teammates in training sessions and matches as actions that damaged team spirit.

His performances had almost tailed off completely, too. Seven goals from 19 Premier League appearances meant a return of 0.37 goals per game compared with 24 goals in 38 games during the 2016-17 campaign, a ratio of 0.63. But more than that, former Gunners striker Ian Wright described Sanchez as looking like he had "clocked off," giving the ball away with alarming frequency in matches and drifting across the turf in a polar opposite style to the Tasmanian devil-style intensity that was his trademark.

The situation had become so toxic that United's intervention in January was in some senses a blessed relief.

Mkhitaryan and Sanchez were unhappy at Arsenal and Man United respectively. They were worse when they swapped clubs, too.

ARSENAL BLOCKED SANCHEZ'S MOVE to Man City because they failed to sign a replacement (Monaco's Thomas Lemar) in time, and so when United were in for Sanchez, Wenger wanted a player in exchange. He originally identified Anthony Martial, having had the club's scouts monitor his progress as a teenager in France, but United immediately ruled out that possibility. Mkhitaryan was a more amenable option, having become a peripheral figure, starting just 10 Premier League games that season having long since lost the trust of Jose Mourinho.

Mourinho came to the conclusion Mkhitaryan was too soft and went missing in matches, leading to this withering assessment upon the Armenian's departure: "He realised he was not ready for this reality: physical, mental, competitiveness."

A central tenet of Wenger's man-management is instilling confidence in players to express themselves, and this seemed exactly what Mkhitaryan needed, his self-belief shot to pieces by Mourinho at United. However, the longer his time at Arsenal went on, the more it felt as though that damage was permanent. Wenger departed after just six months and his successor, Unai Emery, favoured a more clinical approach, which Mkhitaryan found stifling.

"He paid more attention to tactics, so my role changed," said Mkhitaryan in December 2019. "I was starting as a winger, but had to build play with the defensive midfielder.

"It's why I couldn't contribute as many goals or assists. I like to play more freely and move wherever there's space, but you have to do the job that the manager asks."

Mkhitaryan has shown great bravery and versatility throughout his life. Aged 13, he went by himself to Brazil to train with Sao Paulo. He has learned eight languages, the latest of which is Italian during a loan spell at Roma. (The Serie A club are hopeful of making it a permanent move when the transfer window opens.) Yet he was often described at Colney as an introvert. Erudite and thoughtful in private, he rarely conducted media interviews, and when he did, his answers were short and polite but dismissive.

Under Wenger, Ozil was the de facto No. 10. Under Emery, Arsenal often did not play with one at all and the Spaniard's desperation to sign more than one winger in January 2019 was an indication of how Mkhitaryan's displays out wide were viewed.

The most damning indictment of his Arsenal career is that he will perhaps be remembered best for the match he never played in: the 2019 Europa League final. UEFA's decision to stage the showpiece event in Azerbaijan introduced a political dimension to a sporting occasion: Armenia and Azerbaijan have been at war for decades over the disputed Nagorno-Karabakh region, and as a high-profile Armenian national, Mkhitaryan's safety in Baku was deemed at risk. In truth, Mkhitaryan probably wouldn't have started the match in any case given his intermittent involvement. The winger started six of Arsenal's final 15 matches that year and didn't feature in the Europa League beyond the round-of-16, first-leg defeat to Rennes on March 7.

By September, Mkhitaryan was shipped out to Roma, parked on loan in Italy as someone else's problem. The same fate had already befallen Sanchez a few days earlier.

IN SANCHEZ'S SECOND PREMIER LEAGUE APPEARANCE for Manchester United, a home game against Huddersfield on Feb. 3, he gave the ball away on 32 occasions. No United player had done so more in one game all season.

"United fans and staff seemed surprised how often he gave the ball away -- it is like none of them watched Arsenal play for the final year he was with us," one of Wenger's backroom staff team told ESPN.

Sanchez broke up with his girlfriend shortly after moving to Manchester, exacerbating issues in settling at the club, but nevertheless, the lack of due diligence from both sides -- especially United -- in this deal is perhaps the biggest lesson teams can learn if they embark on swap deals this summer.

There were concerns at Arsenal that Sanchez was physically exhausted. He had taken part in four successive summer tournaments -- the 2014 World Cup, 2015 Copa America, 2016 Copa America and 2017 Confederations Cup -- which had led to reservations about his ability to reproduce those match-winning, high-octane performances that once made him such an influential player. Arsenal did offer him a new deal, but they weren't prepared to break the bank as they eventually did with Ozil, reluctant to lose a star but consoling themselves in the knowledge his best years might be behind him and a sometimes troublesome character was out of the picture for good.

Signing Mkhitaryan was a rough like-for-like replacement, but it did not solve the key problem Arsenal had as a team: a porous defence and a lack of steel in central midfield. Similarly, United signed a creative player with diminishing pace unable to speed up their slow attacks and often played him on the right wing, where he is far less effective. They already had Martial and Marcus Rashford to operate off the left flank and Sanchez was a meaningful upgrade only in reputation rather than form. They simply needed strengthening first in other positions.

United chief executive Ed Woodward's desire to trump City in the transfer market, proving United could rival City off the pitch if not on it, led to a hasty decision and an outlandish £400,000-a-week wage. Meanwhile, Wenger's preference for creativity over control led him to focus on attacking talent rather than long-standing issues at the back.

Both men had the wrong priorities in enhancing their squads, which led to a swap deal that worked for nobody and financial obligations both are still trying to reconcile now, with Mkhitaryan wanting to join Roma and Sanchez at Inter Milan and an uncertain future ahead.

So, to anyone viewing swap deals as a panacea this summer: you have been warned.