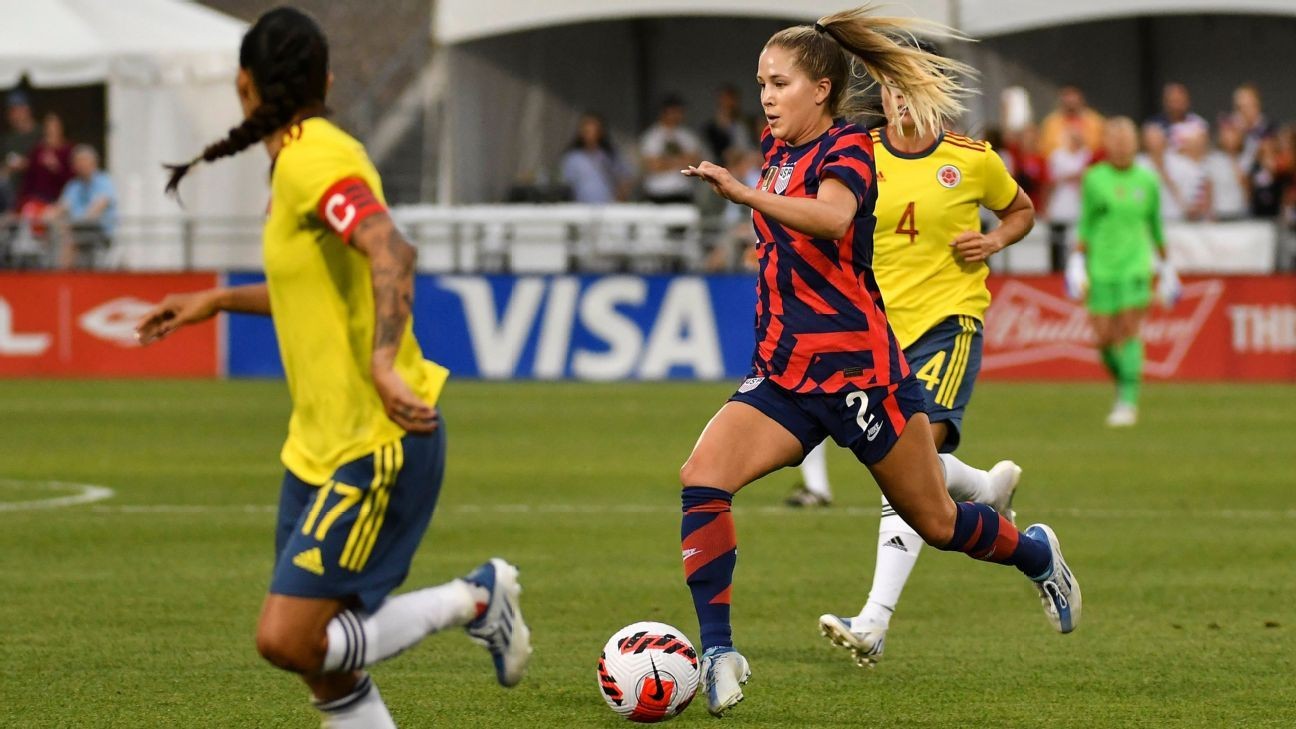 Catarina Macario was meant to be the focal point of the United States' generational transition. That plan, however, had to be put on hold after the 22-year-old tore her ACL in May in Lyon's final match of the season.

On Saturday, ahead of next month's World Cup qualifiers, the Americans got their first look at life without Macario -- and a preview of what much of qualifying will look like against lower-ranked opposition.

The U.S. slogged through a scoreless first half against Colombia at Dick's Sporting Goods Park in Commerce City, Colorado, before scoring three times in a much better second 45 minutes to win, 3-0.

Washington Spirit striker Ashley Hatch started in the No. 9 role on Saturday ahead of Alex Morgan, who leads the National Women's Soccer League with 11 goals in 10 regular-season games (17 goals in 17 games all competitions). Hatch is a seasoned poacher who won the NWSL Golden Boot last season, and she is the most traditional center-forward option the U.S. has. She got her first start of 2022 on Saturday, and there appeared to be a lack of familiarity with wingers Sophia Smith and Mallory Pugh as the U.S. struggled through the first half. Movement from the front three was too stagnant, and execution in the final third was frequently sloppy.

Colombia set up in a low defensive block much like the U.S. expects to see from some opponents at World Cup qualifying, which begins on July 4. Overmatched opponents have played the Americans that way for years with varying levels of success, although Colombia's use of a sweeper behind its back four is unlike anything the U.S. has seen in a long time.

"It's no secret that they were very much focused on not getting scored on," U.S. coach Vlatko Andonovski said. "So, the main focus for us is going to be [the] final third, different combinations, creating space, and executing the opportunities that we create."

Morgan -- in her return to the team after a nine-month hiatus -- replaced Hatch to start the second half, and that substitution, along with the insertion of Ashley Sanchez in place of Lindsey Horan, immediately changed the tone of the game for the Americans.

Sanchez joined Rose Lavelle to create an aggressive system utilizing two attacking central midfielders. Lavelle and Sanchez are exceptional dribblers in tight spaces and, together, their movement to find the ball and subsequent technical mastery drew Colombia out and forced the visitors to lose their shape. Lavelle pounced on the occasion, playing a pair of sublime through balls to assist Smith for goals in the 54th and 60th minutes.

Ashley Sanchez was instrumental as the USWNT worked its way to a 3-0 victory over Colombia on Saturday. John Leyba-USA TODAY Sports

These are the games in which Lavelle is most needed. Lavelle was ushered into the senior team in early 2017 in response to the U.S. being eliminated in the quarterfinals of the 2016 Olympics when Sweden sat in a low block and dared the U.S. to be creative. The Americans were not, and then head coach Jill Ellis set out to find a playmaker like Lavelle, who could break down defenses on the dribble and play a killer final ball on the ground. Lavelle was central to the U.S.'s 2019 World Cup victory and won the Bronze Ball at that tournament.

Now, Sanchez presents a similar profile in a similar place in the cycle. Like Lavelle, Sanchez is unpredictable, trying bold moves that range from backheel nutmegs when she is trapped on the sideline in a 2-v-1, to a scorpion-kick assist. She played a role in the buildup to the first goal on Saturday and she was fouled on the dribble to set up the free kick which resulted in the U.S.'s third tally.

"I think that Ashley Sanchez was one of the main reasons why we got a little more sophisticated in the second half," Andonovski said.

"Because she was able to eliminate players on the dribble and she was able to connect well with the players around her. She also asked different questions from the defenders. They had to adjust on a couple different occasions, which, any time you are trying to figure out how to adjust, the opponent is able to take advantage of that timeline. I thought that's where we were very good, taking advantage of the period of adjustment that the opponent had."

Together, Sanchez and Lavelle give the U.S. an unprecedented level of ball mastery and creativity in the middle of the park. Andonovski will need that throughout qualifying, when the risk of having the back four exploited is lower. They could prove useful either in tandem or in rotation come the 2023 World Cup in Australia and New Zealand.

This, like with the No. 9 role, is where Macario's absence is felt. Macario, who was one of the best players in Europe this season for Champions League winners Lyon, established herself this spring as a false nine whose interchange with Lavelle created a fluid, dangerous attack capable of confusing opponents. Andonovski marveled at how the players around Macario adapted to her.

With Macario out for the foreseeable future, the No. 9 role is up for grabs, and there is a void to fill in the departments of creativity and game-changing ability. Placing such significance on the absence of a player who only has 17 caps might seem like hyperbole but building around Macario for right now, and for the 2023 World Cup, is exactly what the U.S. spent the last nine months doing.

Now, it's down to Morgan and Hatch to fill that No. 9 role. Hatch is not done having a say -- and Andonovski praised her postgame when asked -- but Morgan reminded the world (and Andonovski) on Saturday why she has been the U.S.' dominant forward of the past decade, scoring 115 goals and winning a pair of World Cups over 190 caps.

Morgan evolved her game through the years to be more multidimensional than she typically gets credit for, but she is still a very different player from Macario, and that means the approach that was being developed this spring will require some retooling at a crucial stage.

Sanchez will be part of that process, too. She, too, is relatively inexperienced at the international stage, but that is where the U.S. finds itself now, on the eve of World Cup qualifying: turning back to Morgan and Megan Rapinoe, who also made her return to the team and assisted on the third goal, and to new players like Sanchez and Taylor Kornieck, who scored that final tally in her first international cap.

Whether Andonovski has the right mix of veterans and youth will be determined at World Cup qualifying in Mexico. There is little danger of missing the tournament given the four spots up for grabs, but with only the winner of the CONCACAF W Championship automatically qualifying for the 2024 Olympics, getting these decisions correct now is a must.