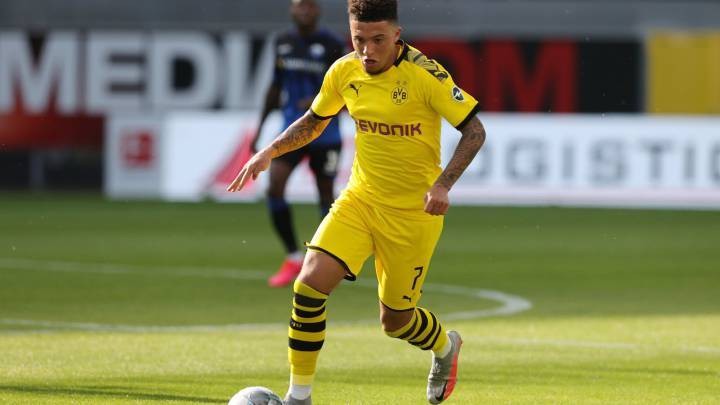 Speaking on the AS football show 'La Futbolería', Sergio Santos tells the story behind Real Madrid's failed 2017 move for the Borussia Dortmund star.

However, the winger - who is now emerging as a transfer target for Madrid once more - failed to gain assurances from Los Blancos over his first-team role, and instead opted to join Borussia Dortmund, where he has flourished.

“A sign of how much Madrid wanted Sancho was that it was [general manager] José Ángel Sánchez who personally oversaw the bid to sign him,” Santos explained.

“It got to the point where Sancho’s father was going to come to Madrid to get to know the club’s facilities - but the deal hit one particular stumbling block: Sancho wanted to be in a first-team player from the word go.

“He wanted to train with the first team and play for the first team, and only drop down to the ‘B’ team, Castilla, to play the odd game here and there. A bit like Rodrygo Goes and Vinicius Junior have since gone on to do.

“Now that we see the player Sancho has become, you can be forgiven for thinking: Madrid should have given him the first-team presence that he was asking for. But Madrid’s experience with Martin Odegaard was still fresh in the memory.

“These days, of course, Odegaard is shaping up as a future world star and is in line to go back to Madrid, but at that time the club were getting a lot of stick for having given Odegaard a contract that said he would train with the first team and only drop down to Castilla to play games.

“So Madrid didn’t want to agree a contract that said he [Sancho] had to be a first-team player. Clearly, Sancho had the ability to break into the first team very quickly, but the club didn’t want it to be part of his contract.

“So Sancho chose Dortmund, because Dortmund gave him the number-seven shirt, made him Ousmane Dembélé’s successor, gave him his first-team debut within a month of his arrival, and that season he went on to play 12 games in the Bundesliga. That was Sancho’s priority.

“Madrid knew he had the potential to establish himself in the first team, but neither [head coach] Zinedine Zidane nor [club talent scout] Juni Calafat wanted it to be part of his contract. That’s what the player demanded, and he was insistent.

“If Madrid had accepted what he was demanding, there’s a good chance Sancho would be a Real Madrid player right now.”

As part of their strategy of buying up-and-coming stars of the world game, Real Madrid are thought to be eyeing a potential summer 2021 swoop for Sancho, who has been in superlative form for Dortmund, scoring 20 goals and supplying 20 assists in all competitions so far this season.

In all, Sancho, 20, has scored 34 goals in 94 appearances for Dortmund, with his performances also seeing him establish himself in the England team, winning 11 caps.