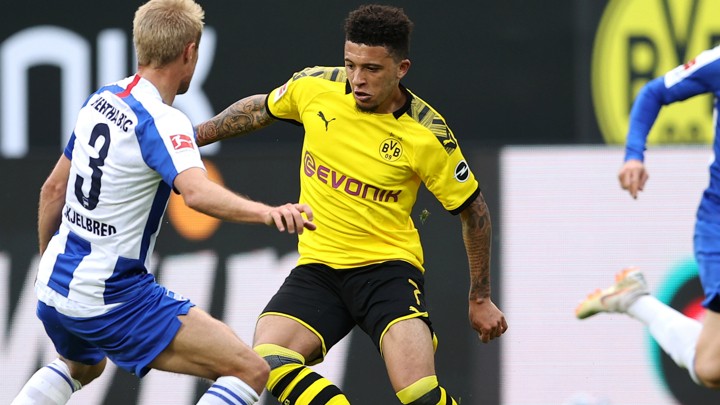 After the German Football League (DFL) fined Sancho this week for violating social-distancing protocols following a haircut at home without wearing a face mask, the England star helped Dortmund past Hertha on Saturday.

Emre Can, who urged Dortmund team-mate Sancho to "grow up" and improve his discipline post-game, scored the winning goal at Signal Iduna Park.

Sancho continues to be linked with Premier League giants United and Liverpool, and Dortmund boss Favre praised the 20-year-old attacker.

"It's important that he's here. I know Jadon very well. He was injured for a long time," Favre said of Sancho, who scored a hat-trick against Paderborn last week.

"He couldn't train with the team for three or four weeks. We should be patient with him. He's back now."

Can's 57th-minute goal proved decisive as Dortmund strengthened their grip on second place in the Bundesliga with their latest win.

Dortmund – who are seven points adrift of leaders Bayern Munich – moved four points clear of third-placed RB Leipzig and seven ahead of Borussia Monchengladbach in the Champions League race with four games remaining.

"It's very good that we won today," Favre said. "We now have a seven-point lead ahead of two teams.

"But it doesn't matter. We want to keep going like this. We've got four games left. We'll go at it game by game. We want to do our best."

Favre added: "We created chances without a real centre-forward. That is the most important thing for us and for me. For example, our goal: it's a good pass from Sancho, [Julian] Brandt plays a fantastic ball on, the ball comes to Emre Can, and he scores the goal.

"We created more chances before and after that and could have won more than 1-0. But Hertha also made it difficult for us – they had a good team on the pitch. But in the end, we won."