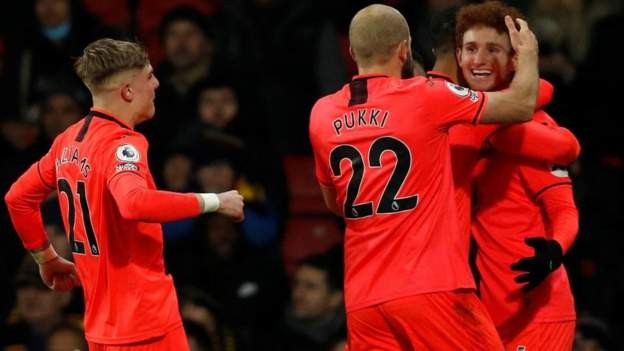 Josh Sargent scored twice to help Norwich City gain a much-needed victory over 10-man Watford and move out of the Premier League relegation zone for the first time this season.

Sargent acrobatically hooked Teemu Pukki's cross from behind him and saw it bounce in off the underside of the crossbar for Norwich's opener.

The 21-year-old's thumping header made it 2-0 after a lengthy stoppage in play because of a floodlight fault.

Norwich rubbed salt in Watford's wounds with a third goal late on - substitute Juraj Kucka poking past his own goalkeeper at the near post.

Sargent, who had not scored in the Premier League prior to this victory, celebrated wildly as he put his side in the driving seat midway through the second half.

Watford were stunned by his double and were further hampered by Emmanuel Dennis' sending off - the forward shown a second yellow card by referee Mike Dean for a rash challenge on Max Aarons.

Shortly before Kucka poked in Adam Idah's pull-back, Watford had a goal disallowed when Moussa Sissoko thumped in a stunning volley from an offside position.

Cucho Hernandez later hit the crossbar for Watford but Norwich were comfortable winners in the end, and move two points above the hosts in the table.

Claudio Ranieri's side still have two games in hand but it was an 11th defeat in 13 games during his tenure, while Dennis' sending off means he will miss another crucial relegation battle with bottom side Burnley on 5 February.

Reaction to Norwich's win over Watford

Sargent's celebrations, which were echoed by the visiting Norwich supporters, showed how important this victory was to Dean Smith's side.

It is the first time this season Norwich have moved out of the bottom three, while defeat for Watford piles more pressure on manager Ranieri.

Norwich were most people's favourites to go down before Christmas but back-to-back wins over Everton and Watford have seen them shoot up the table from bottom to 17th in just over a week.

The relegation battle promises to continue as Burnley, now at the foot of the table, have five games in hand on Norwich, having had numerous games postponed because of Covid-19 cases and injuries.

Watford and Newcastle United also have games in hand, but with no side in the current bottom six winning more than five games so far this season, Norwich will be heavily boosted by their recent victories.

The Canaries face a tough February including games against Manchester City and Liverpool, but Watford are under pressure to bounce back against Burnley in their next match having already dropped points to relegation rivals Norwich and Newcastle in recent games.

Brandon Williams (Norwich City) wins a free kick in the defensive half.

Moussa Sissoko (Watford) wins a free kick in the defensive half.

Cucho Hernández (Watford) hits the bar with a right footed shot from outside the box. Assisted by Moussa Sissoko.

Attempt missed. Joshua King (Watford) right footed shot from outside the box misses to the left.

Attempt missed. João Pedro (Watford) right footed shot from outside the box is just a bit too high.