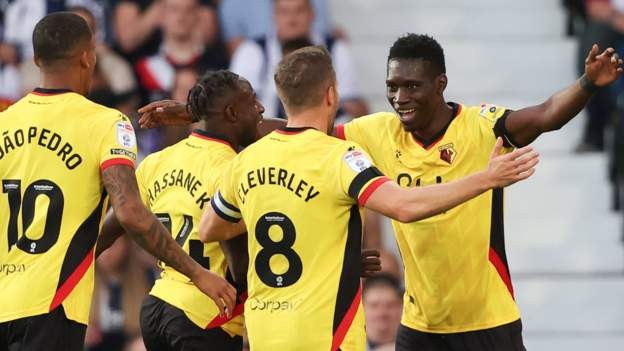 Ismaila Sarr scored a spectacular David Beckham-style chip from his own half but then had a late penalty saved as Watford drew with West Bromwich Albion at The Hawthorns.

Despite being second-best for most of the match, Watford took the lead in sensational style on 12 minutes when Senegal forward Sarr took down a clearance, nudged the ball out from under his feet and coolly lifted it over the stranded David Button from almost 60 yards.

That came against the run of play, Watford keeper Daniel Bachmann having already been kept busy, with one superb save from Darnell Furlong's volley and two from Karlan Grant - and there were more to follow.

Watford remained on the back foot for much of the second half, yet they came closest to winning it when Sarr went down easily in the Albion penalty area under pressure from Semi Ajayi.

But Sarr's spot-kick was tame, struck far too feebly to Button's left - and the Albion keeper swooped to save.

They will both have an early chance to overtake Blackburn Rovers, the only side with a 100% record in the Championship after two games.

Steve Bruce's Albion, by contrast, have now lost just three of their past 14 Championship games - and, although they have only drawn the first two matches, the Baggies have come from behind in both - and should still have plenty to feel positive about when they head to Blackburn on Sunday.

"Sometimes you don't always get what you deserve, but that's as good as I've seen us play and to do it against such a good side made it feel even better.

"It's very frustrating that we didn't go on to win but it was still a tremendous reaction from the players after conceding such a wonder goal against the run of play.

"It's desperate news that we have lost Daryl Dike with a thigh injury in training. He so wants to play for his country at the World Cup, he's a popular lad and he knew as soon as he'd done it."

"It was an incredible strike from Sarr. As soon as it left his foot I knew it was in.

"A moment of genius. It's pretty special when you see a goal like that - and against the run of play too.

"It would have been pretty unjust if we had nicked that second goal from the penalty as Albion were up for it and were clearly the better side. But I'd have taken it."

Dara O'Shea (West Bromwich Albion) wins a free kick in the defensive half.

Attempt missed. Semi Ajayi (West Bromwich Albion) header from the centre of the box is too high. Assisted by Jed Wallace with a cross following a corner.