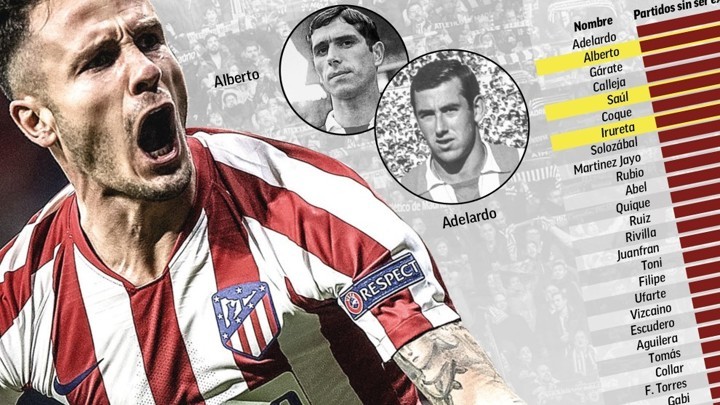 Although he is only 25 years old, Saul's experience with Atletico Madrid makes him a veteran alongside the likes of Koke and Diego Costa.

While he is a loyal soldier, he has not been sent off in a single one of his 286 appearances for the club.

His sacrifices, his availability to play all over the field and his stamina, being Diego Simeone's most used player for the past two seasons, add to never leaving his team with 10 men.

Only four players have played more games for the club without seeing red: Adelardo Rodriguez (375 appearances), Alberto Fernandez (362), Jose Eulogio Garate (318) and Isacio Calleja (317), with Adelardo the only never to be dismissed for Atleti.

Not even players considered true gentlemen, like Luis Aragones, Fernando Torres or Koke, have avoided seeing a red card.

If Saul keeps this up and reaches 300 games without a red card, he could overtake some of the four men ahead of him next season.

While he's played 286 games without a dismissal at Atletico, he was sent off for a double yellow card on loan at Rayo Vallecano, with just 11 minutes between the two cards.

In the youth teams he went through the same experience and it also happened in a European Cup qualifier for Spain's Under-21s, though it hasn't happened since then in October 2015.