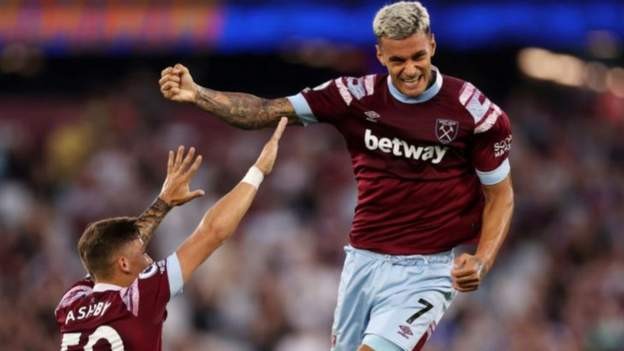 Gianluca Scamacca joined West Ham in a £30.5m deal from Italian side Sassuolo this summer

The Italy forward, a £30.5m signing from Sassuolo, was handed his first start and took just 24 minutes to make an impact when he headed in following neat play on the left from fellow new arrival Maxwel Cornet.

It set the hosts on their way to a welcome first victory this season, having lost their opening two Premier League games without scoring a goal.

Jarrod Bowen zipped a second into the bottom corner from distance with 26 minutes to go but the visitors hit back immediately through Jakob Bonde's header.

That threatened to make life uncomfortable for the Hammers until substitutes Said Benrahma and Michail Antonio combined for the latter to tap into an empty net and secure a healthy advantage going into the second leg.

That game will take place in Viborg next Thursday, with the winners joining the group stage of the competition when it begins on 8 September.

Scamacca gets Hammers off the mark

It's been a testing start to the new campaign for West Ham, with an opening-day defeat by champions Manchester City followed by another against newcomers Nottingham Forest.

But they got up and running in Europe's third-tier competition thanks largely to some fresh faces at London Stadium.

It was the Italian, signed after scoring 16 goals in 36 games for Sassuolo in Serie A last season, who met Cornet's cross with a smart header after good work from the former Burnley man to open the scoring in an otherwise quiet first half.

With Billy McKinlay taking charge in his absence, manager Moyes watched from the stands and was seen handing bits of paper to another of his first-team coaches, Kevin Nolan - Uefa's regulations say there should be no communication with technical staff during the match.

Last season's standout performer Bowen looked to have put the Hammers in control of the tie with a well-placed long-range effort but Viborg showed resilience and pulled one back through Bonde's back-post header.

It was only last year they were playing in the Danish second tier, winning that division in 2021, finishing seventh in the top flight and reaching this stage of the competition thanks to wins over Lithuania's Suduva and Faroe Islands side B36.

They were missing two players who scored in that run, in Nigerian winger Ibrahim Said and Gambia forward Alassana Jatta - unable to travel because of entry rules for non-EU citizens post Brexit - and West Ham's greater depth told late on.

Benrahma's clever footwork saw him surge into the box on the left, before picking out Antonio for a simple finish 12 minutes from time that will give the Hammers breathing space heading into next week's return leg.

Jay-Roy Grot (Viborg FF) wins a free kick in the attacking half.

Maxwel Cornet (West Ham United) wins a free kick in the defensive half.

Attempt blocked. Nils Mortimer (Viborg FF) left footed shot from the right side of the box is blocked. Assisted by Sofus Berger with a cross.

Attempt saved. Maxwel Cornet (West Ham United) left footed shot from the right side of the box is saved in the top centre of the goal. Assisted by Vladimír Coufal with a cross.