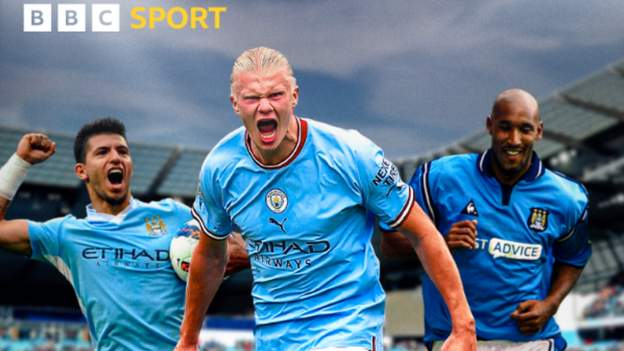 It may have been a Manchester derby but to Erling Haaland it was just another game and another record broken.

His three goals in the 6-3 thrashing of Manchester United at Etihad Stadium ensured he became the first player to net three successive hat-tricks at home in the Premier League.

The 22-year-old is so used to scoring - and scoring hat-tricks - that he put his arm around team-mate Phil Foden in their post-match interview and joked they could have a match ball each after the Stockport-born forward also netted three against United.

Former United and City goalkeeper Peter Schmeichel told BBC Radio 5 Live you could "see different players in Haaland" and he is like the "top strikers all in one".

"The biggest part of a good striker is patience. In my time I played against some of the best strikers and when they go missing is when you really have to concentrate," added Schmeichel.

"The Cristiano Ronaldos, the Filippo Inzaghis of this world - they just disappear then all of a sudden they get the chance.

"When you look at Haaland, you see different players. That Zlatan-like goal and Ronaldo is in there. You see top, top strikers in one.

"That is why he is so dangerous. He has the luxury of seeing many top strikers and they are all put into one player."

Manchester United 'lacked belief' says Erik ten HagUnited rivals to City? Not a chance - this was humiliationYou can now get Man City news notifications in the BBC Sport app - find out more

'The numbers are scary'

"Yeah, not bad" was how Haaland responded when Sky Sports asked him about his performance in the derby.

"We scored six goals. What can I say. To win at home, score six goals, it's nice. In the end, it's amazing. There is nothing more to say," he added.

It has often been "nice" for Haaland since joining City, and manager Pep Guardiola said his goalscoring numbers have been "scary".

"The numbers speak for himself. He has done this before here. It is not just our way. Always we try to help him in our environment," said Guardiola.

"We have this incredible sense that he always looks starving and is so competitive. The numbers are scary."

Haaland's latest hat-trick took his tally to 17 goals and three assists in his last 11 games.

His nine goals in his first five matches made him the top scorer in August of any Premier League season.

"Confidence is good, it's always been good. After the Community Shield [defeat to] Liverpool, it was still good. It was good that this match happened and I knew I just have to be ready.

"I felt a couple of days before the [Manchester derby] that something special was going to happen and some special things happened so it's nice. It's these games I want to play in."

What records has Haaland already broken?

The rate at which Haaland is scoring led former Chelsea striker Chris Sutton told BBC Radio 5 Live to say "he is a freak".

He also compared him to ex-England striker Alan Shearer, who still holds the record of the most goals scored in the Premier League with 260.

"If Haaland hangs around, Shearer's record is going. I'm not sure Harry Kane will quite get there. This guy has got the absolute lot.

"Robbie Savage said he will get 51 goals. That is not ridiculous. If he stays fit, that is really feasible."

Former England defender Jonathan Woodgate said he had "never seen a centre-forward as clinical as Haaland" and he "has everything".

"He finds space in the box and he's devastating when he gets in there. A phenomenal, phenomenal talent. I don't see a real weakness to his game," Woodgate said on BBC Radio 5 Live.

"If Manchester City had Haaland last season, they would have won the Champions League."

But it was not just Haaland who stole the headlines on Sunday as academy graduate Foden scored his first senior hat-trick.

"A hat-trick from a local lad is special. It is so good to see. To get a hat-trick in a derby - what more could you want?" former City defender Micah Richards told Sky Sports.

Woodgate added: "England should build their team around Foden, he is that good. What a fantastic talent."

Lifelong City fan Foden said it was a "dream come true" to net his first goals against Manchester United.

Guardiola added: "His desire, how he runs, is the main thing. He deserves to play every time and then he has quality. He is a young player and it is a reality. He deserves everything."

'Haaland is greatest striker on the planet' - how you reacted

Adam: Haaland is the greatest striker on the planet right now. Only Lewandoski comes close. Phenomenal.

Tim: Wow. The only way to stop Haaland scoring is a transfer to Chelsea... (Chelsea fan).

Mahesh: It's good if Haaland keeps scoring like this, he will get bored soon and leave early rather than wait 2.5 years.

Teflon Don: Man City went and bought a monster. Haaland is a force of nature, an act of God.

Doug: I hope Kane and Son are enjoying that goal/assist partnership record while it lasts. At this rate Haaland and De Bruyne will have it by the middle of next season.

Andrew: The De Bruyne/Haaland link-up could dominate club football for the next 4 or 5 seasons.

David: The way he is going, Haaland is going to beat Alan Shearer's Premier League goalscoring record before Harry Kane!!

Peter: Haaland is a machine. He keeps on pumping out those goals. I was initially sceptical if he'd be able to perform in the PL, boy was I wrong.