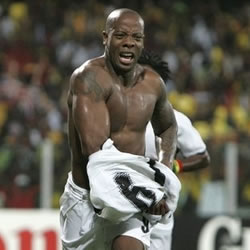 Ghana striker Junior Agogo could be handed a baptism of fire against Scottish title hopefuls Celtic this weekend if Hibernian can ascertain he's a free agent following his exit from Cypriot club Apollon Limassol.

Calderwood had hoped to play 31-year-old Agogo in his side's final pre-season match at Falkirk last night but a training ground knock allied to the need to ensure the much-travelled forward is free to sign saw him sit out the 1-1 draw.

However, Calderwood, who signed Agogo for Nottingham Forest, whom he helped win promotion to the English Championship, remains hopeful of snapping up both his former player and Sheridan, who has returned to CSKA Sofia in Bulgaria following a successful trial period in the Capital.

Agogo, a star of Ghana's 2008 African Nations' Cup campaign, was axed by Limassol after suffering a serious knee injury, from which he has now recovered, in February, but Hibs want his status clearly determined before asking him to put pen to paper.

Calderwood said: "Junior is still here but there's been a problem with the clearance. He's fit but took a little knock in the second day of training and that, added to not having clarification and certainty he was clear to play, meant he couldn't play last night.

"But he is one we certainly hope to progress. I've spoken to him about that and he could, in theory, be available for the weekend. If we could do it, I would push to do that."