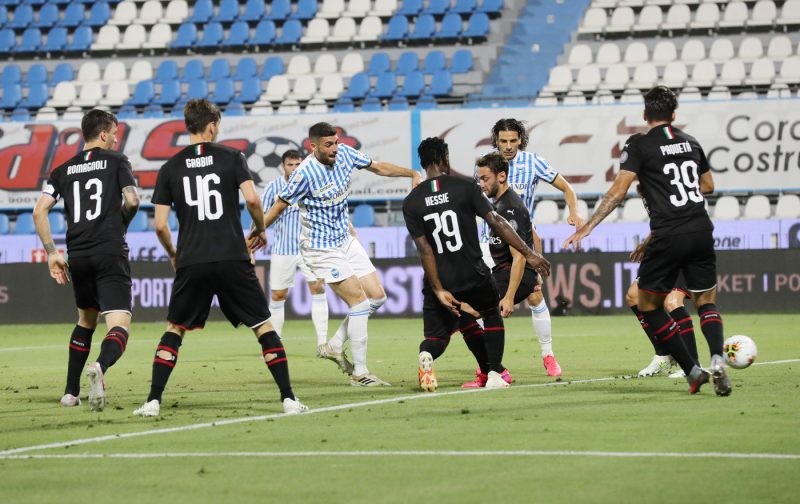 AC Milan’s inability to see off ten-man SPAL on Wednesday evening showed, despite some signs of life last time out, just how far they still have to come.

The Biancazzurri started round 29 rock bottom of Serie A, but Brescia’s 6-0 thumping at the hands of Inter earlier on Wednesday evening boosted them up into 19th without having kicked a ball.

Luigi Di Biagio’s side, perhaps driven on by no longer being bottom of the pile, started well in Ferrara and led as early as the 13th minute through Mattia Valoti.

Far from being a well-worked goal, though, the hosts were handed the advantage through some calamitous Rossoneri defending. Milan failed to deal with a straightforward corner into their area; they left SPAL’s top scorer Andrea Petagna completely unmarked and he flicked on into a crowd.

39 – #ACMilan have attempted 39 shots tonight, their highest tally in a single Serie A game since November 2013 (39 v Genoa). Effort.#SerieATIM #SPALMilan

Matteo Gabbia first, Lucas Paqueta next and then Alessio Romagnoli all made a mess of dealing with it, allowing Valoti to turn on the ball and scuff into the corner.

Sergio Floccari produced a stunner for their second, smashing in a looping volley from 30 yards that nobody could have foreseen.

But then SPAL went down to ten men and, for all their dominance, Milan never really looked like troubling that much.

Stefano Pioli’s side had 39 shots in all – their highest tally in a single Serie A game since November 2013 (39 v Genoa) – but ten of those came from Paqueta and most came from outside the area and were trying to squirm through a wall of Biancazzurri shirts, never causing Karlo Letica too many problems.

It took them until the 79th minute to find the breakthrough and even that came from a SPAL slip. A ball whipped in from the left that somehow caught Nenad Tomovic by surprise before bouncing off him and to Rafael Leao who finished.

Then SPAL were rattled. They struggled and fought to make it over the line and had almost secured three huge points when Francesco Valoti turned another cross, this time from the right, into his own goal.

No guile in possession Hakan Calhanoglu and Paqueta showed some spark on the night, but nobody at Milan has the creativity needed to unpick tight defences like they came up against at the Stadio Paolo Mazza.

Zlatan Ibrahimovic’s arrival saw more crosses being pumped into the area but, for the most part, they were dealt with well and it was only through two tired mistakes that Milan managed to score. Few would have predicted Sergio Floccari to be the 38-year-old forward stealing the show with a spectacular strike in Ferrara, but the veteran has now scored a Serie A goal in each of the last 15 calendar years.

His wondergoal against Milan was his first of the season, and if it turns out to be his last in the Italian top flight he’ll be happy that it was marked in such a fashion.