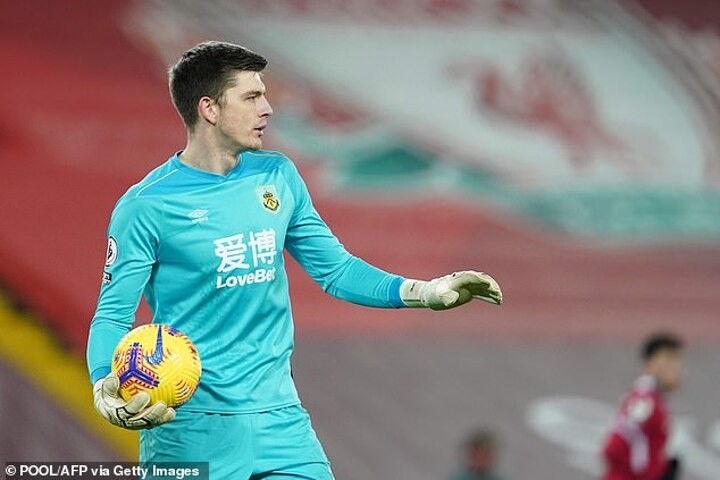 The two sides face each other on Sunday and it has been claimed that the goalkeeper could join Tottenham for £50million.

However, Dyche is adamant that a move won't take place and, with the UK still in lockdown, joked that Tottenham would have to offer 'a bag of crisps and a pint of lager' to sign Pope.

Dyche said: 'If they offered a bag of crisps and a pint of lager, the way things are going, I might actually take it,' he said.

'If someone can find a way of changing the rules of the country to get me a pint and a bag of a crisps, I'd have to try and hang on to Popey best I could.'

Pope has continued to impress this season and has kept nine clean sheets for Burnley out of 24 Premier League appearances, while he has made some superb saves.

There have been doubts over Tottenham's Hugo Lloris, who has made some significant errors.

Lloris has just over a year remaining on his contract and it has been reported that Tottenham may look to bring in a new goalkeeper.

Pope, who has four England caps, possesses plenty of Premier League experience having made 97 appearances in the division.

Burnley are determined to keep hold of Pope, whose contract runs until the summer of 2023.