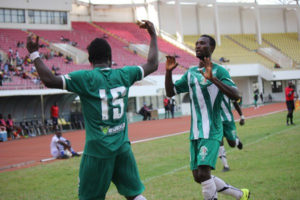 Former Ghana Premier League side Sekondi Hasaacas continued with their fine form in the off-season as they defeated Rail Stars FC in a friendly on Sunday.

Isaac Mensah's second half goal separated the two team on the day, after Hasaacas had made many changes to the team.

Ibrahim Sanah returned to the squad after almost a year out with injury, but showed class as the experienced team dominated proceedings.

Hasmal took the lead early in the second half and created some decent goalscoring chances.

Despite Rail Stars seeing the chunk of the ball, it was Hasmal that threatened in front of goal on numerous occasions.

George Ekow Annan came pretty close to goal, but his shot narrowed off target after receiving a defense splitting pass from John Koomson.

The real scare came when Ibrahim Sanah bent a free kick over the wall which nearly put us 1-0 ahead.

Meanwhile, Rail Stars threw more men forward in a bid to level up the game but their attacks were flawed by the trio of Yahaya Seidu, William Enchill and Jay Kola Asamoah.