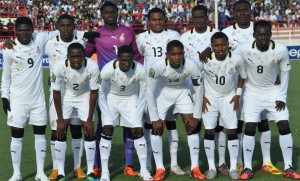 Ghana have qualified to the 2013 FIFA U20 World Cup in June.
Share

Ghana secured a 2013 FIFA U20 World Cup qualification berth after a 2-0 success over hosts Algeria at the African Youth Championship on Friday.

The Black Satellites went into the final Group A needing just a draw to progress to the semi-final of the competition and a ticket to Turkey but went for the kill.

The Young Dessert Foxes dictated the pass early on and pinged the ball around nicely but could not penetrate Ghana's backline.

Against the run of play, midfielder Siedu Salifu blasted a thunderbolt from 25 yards which rocketed into the net with goalkeeper Nassim Torche completely beaten.

Ghana continued to soak the pressure and after 14 minutes striker Ebenezer Assifuah broke loose but Michael Anaba could not connect the pass laid to him inside the box.

Benkablia again was the target man when a piercing cross from Hicham Aoulmi but the former failed to find a connection.

The Satellites turned on the heat again in the 29th minute and Anaba this time went on a solo run and wriggled his way into the box before hitting the bar line to send in a cross which was expertly directed into the net by Assifuah.

After the break, Algeria coach Jean-Marc Nobilo made two changes but could not yield dividends.

Ghana did not change their game plan as they defended well and threatened with their counter-attacks.

Assifuah on few occasions run at the Algerian defenders but his final deliveries let him down.

The Black Satellites will meet the first placed team in Group B in the second semi-final on Tuesday in Oran.

Watch video of the goals below