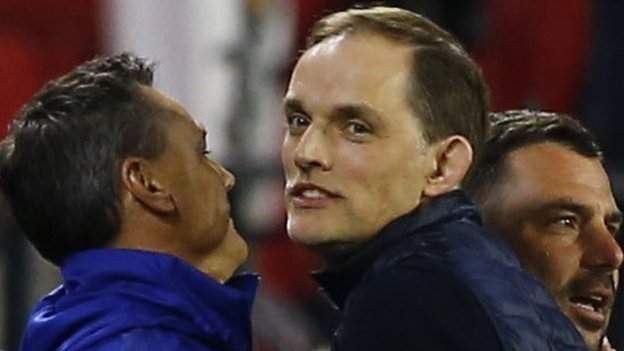 Porto have exited in the Champions League knockout stages on 14 occasions, with 50% of those eliminations coming at the hands of English sides

Chelsea boss Thomas Tuchel said reaching the last four of the Champions League is a "great achievement" as the Blues moved into the semi-finals for the first time since 2014.

Chelsea will play either Liverpool or Real Madrid for a place in the final after a 2-1 aggregate win over Porto.

"We will become a strong side," he told BT Sport after his team lost the second leg 1-0 in injury time.

"We could not finish it off with a goal so we had to hang in there."

Chelsea were ninth in the Premier League when Tuchel arrived in January but he has guided them to within a point of the top four, the FA Cup semi-finals and now into a Champions League semi-final despite Mehdi Taremi's superb late winner in Seville, which hosted both legs of the tie because of coronavirus restrictions.

Tuchel was a beaten finalist with Paris St-Germain last year and would not be drawn on whether he would rather face Liverpool or Real - who have a 3-1 first-leg advantage.

"In general I like not to play against teams from your same league in the Champions League as it gives more of a feeling of a European competition but that is the only thing," he said.

"The Liverpool tie is far from over but I will watch it for sure.

"It is a pleasure to watch it as a semi-finalist, which is a great achievement. We will watch these games and everything is possible. Liverpool are very strong at home so we take what we get. It is a good situation for us."

Chelsea and Liverpool met in three epic semi-finals and a quarter-final in the space of five years between 2005 and 2009 but Jurgen Klopp's side will need another stirring Anfield comeback to set up a rematch later this month.

Chelsea have actually now reached more Champions League semi-finals than any other English side in the competition's history - eight - but have just one trophy to show for their efforts.

But who would they rather face?

"On paper it's one of the worst Real Madrid teams in living memory, in terms of names and fear factor," former Blues and England goalkeeper Rob Green told BBC Radio 5 Live.

"But they do have a manager in Zinedine Zidane who gets it right in the Champions League.

"They have made it through and could get through again - they get it right at the business end. If you're Chelsea I do not know who you'd rather play."

"We will take anyone [in the semi-finals]," Chelsea midfielder Mason Mount told BT Sport.

"We're ready for the fight. We get to sit down and watch the Liverpool v Real game now and really analyse it. We will be ready for anyone.

"It's difficult to come in midway through the season but he [Tuchel] has had a big impact on the players.

"We have known from day one what he has wanted and implemented it in the games.

"We are working hard in training and it is showing. We are looking solid as a team. We have been performing at a high level. We need to continue that."

Mindful Music Mix: Take some time for your wellbeing todayGlasgow's first Michelin star in 18 years: Hear from one of Scotland's top culinary cooks