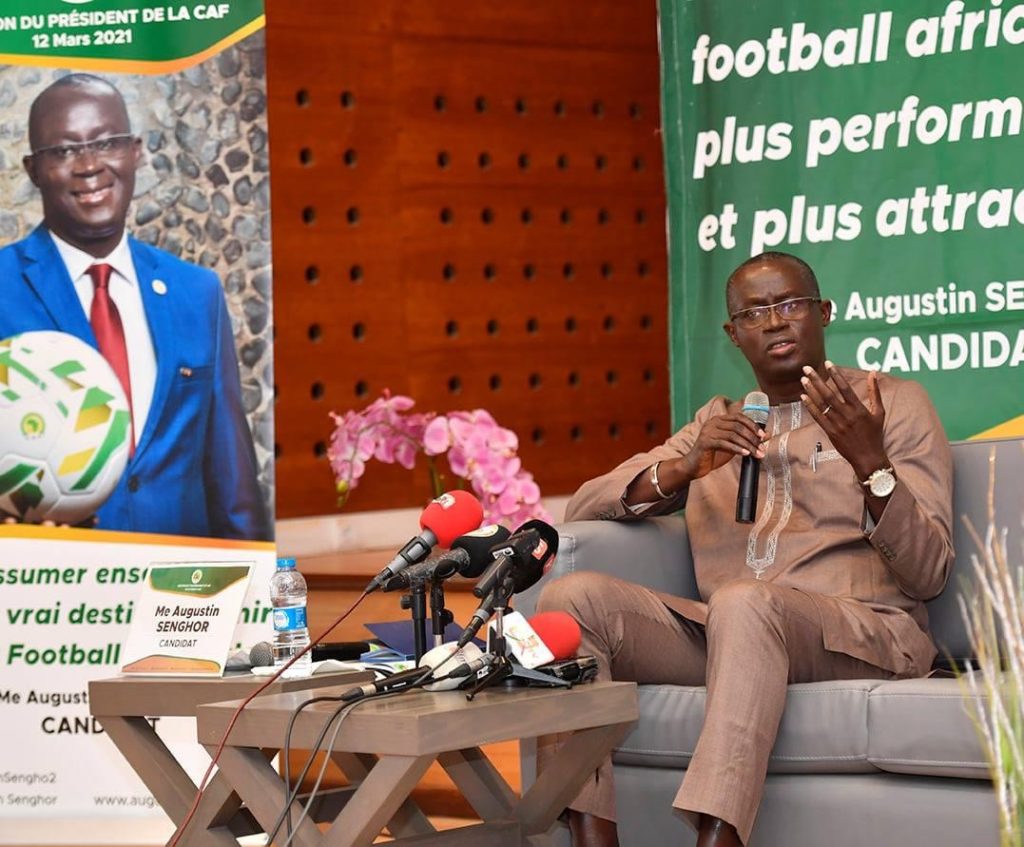 Senegalese experienced football administrator Augustin Senghor has declared that he is the favorite to win the upcoming Confederation of African Football (CAF) presidential election thanks to the widespread support he has received across the continent.

The lawyer, who is also the president of the Senegalese Football Federation (FSF), said his fellow federation presidents in Africa are impressed by his personal record, extensive experience and knowledge in managing the game with forthrightness.

Senghor, a mayor of the historic town of Goree Island in his native Senegal, has been in charge of his country’s football federation for the past 12 years has led his nation to various successes and has served the game on the continent in various capacities.

These qualities he claims is what has warmed the majority of federation presidents to rally around the campaign of the famous lawyer ahead of his competitors Ahmed Yahya of Mauritania, former president of the Ivorian Football Federation, Jacques Anouma, and Patrice Motsepe, who heads the Mamelodi Sundowns football club of South Africa.

Senghor became the first candidate to present his manifesto for March’s election over who leads African football’s governing body for the next four years, unveiling his plans in the Cape Verde capital of Praia on Saturday.

The Senegalese, who speaks fluent English and French, said he chose to reveal his plans to members of his West African Football Union (WAFU) Zone A before revealing during their meeting in Praia as a mark of respect and seeking home support before venturing abroad.

Senghor was speaking at a press conference after the General Assembly of WAFU Zone A revealed that he took time to reflect on the decision to contest the election which will be held in the Moroccan capital of Rabat.

''Often, I give myself time to think things through, I don't make up my mind quickly. But when I decide to go, I go all out, and that's why I present myself as a favorite of this election through my projects and my experience, '' he said.

The president of the FSF launched his campaign last month in Senegal, whose "football federation applied to the contest on my behalf, which is supported by the government and the Senegalese people."

According to Senghor after garnering the support from his home country, the human rights lawyer said the next step was to go to his peers and brother in his zone to seek their support during the WAFU B general assembly.

“In colorful language, I can say that after the house, I'm in the big yard, which is WAFU Zone A. And I really wanted to do it on the sidelines of this general assembly,'' he said.

After unveiling his manifesto plans hinged on 11 key points to revive African football, the boss of the FSF invited all the candidates to a debate over their plans for the game in the continent.

Senghor addressed the press in the presence of Guinea FA President Antonio Souare who is also the leader of Wafu A as well as his counterparts from Cape Verde, Liberia, Gambia and Guinea-Bissau.

Mali and Sierra Leone were represented at the press conference by members of their federation.