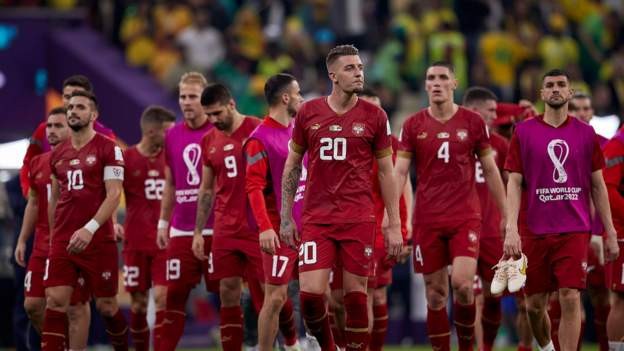 Fifa has opened disciplinary proceedings against Serbia's football association after its team hung a controversial flag depicting Kosovo in their dressing room prior to their World Cup defeat by Brazil.

The flag showed an outline of Kosovo filled with the Serbia flag, with the words 'no surrender'.

Tensions are running high between ethnic Serbs and the Albanian-led government in Kosovo, amid fears violence could flare up again, 23 years after the Kosovo war.

Kosovo declared independence from Serbia in 2008 but Serbia - an ally of Russia - does not recognise it as an independent country.

In a statement, it said: "Such acts of chauvinism have no place in a sports event, and even less inside the facilities where the biggest event of world football takes place, therefore FFK, as an equal member with all other members of Fifa, demands from this institution to undertake sanctioning measures against actions that incite hatred between peoples and are against human values."

It added: "It is unacceptable for this act to pass in silence, therefore we strongly request that Fifa strictly implement its rules and punish the football federation of Serbia for this aggressive action and against the values ​​that football conveys."

Fifa's proceedings were opened on the basis of article 11 of the Fifa disciplinary code, which is "offensive behaviour and violation of the principles of fair play" and includes "using a sports event for demonstrations of a non-sporting nature", as well as article four of the regulations for the 2022 World Cup which refers to team's responsibilities at the tournament.

Kosovo was accepted into Uefa and Fifa in 2016 but under Uefa rules, Serbia and Kosovo can not play each other in World Cup qualifying because of the tensions between the two countries.

Serbia were beaten 2-0 by Brazil in their World Cup opener in Qatar on Thursday, and play Cameroon in their next Group G fixture on Monday.

Kosovo did not qualify for the World Cup.