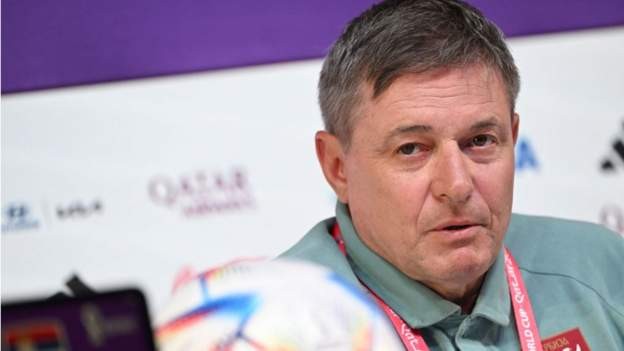 Serbia say they will look for holes in the Switzerland defence as journalists reached for metaphors about the Swiss before their World Cup meeting.

Serbia sit two points behind second-placed Switzerland and must win to have a chance to reach the last 16.

Serbia coach Dragan Stojkovic was asked if they were facing a side ticking over with the precision of Swiss watches.

"We'd really like to talk about their cheese and find their weak spots - the holes - to get the result," he said.

If Serbia win the Group G game on Friday at Stadium 974, they could qualify for the knockout stages for the first time.

The Swiss, meanwhile, need only a draw if Cameroon do not beat Brazil.

"We knew after the [group stage] draw was held that Brazil is an entirely different dimension and we would be fighting for second place with Cameroon and Switzerland. These forecasts brought us to this point," said Stojkovic.

"We knew the match with Switzerland would be of major importance as the last one in the group, and this is what we're now faced with. We've witnessed a lot of surprises at this World Cup, but we will be ready."

Stojkovic said Juventus striker Dusan Vlahovic is fit but would not confirm if he would be named in the starting line-up.

Vlahovic has started on the bench in both games so far, with Fulham striker Aleksandar Mitrovic spearheading the attack.

"Vlahovic is ready for the match and his physical state is a lot better than it was when we came to Doha. He could start tomorrow [Friday] but I cannot share this with you today," Stojkovic said.