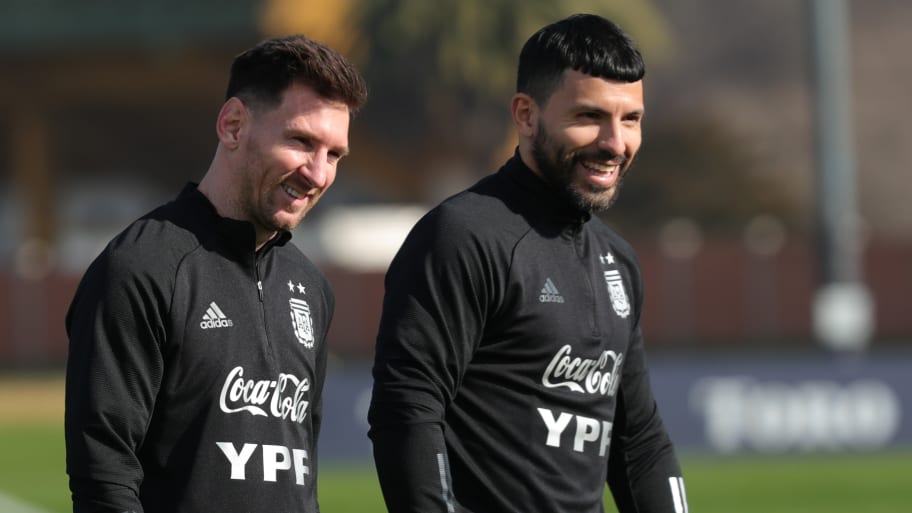 Sergio Aguero has revealed he tried to distract Lionel Messi at his home when it became clear he would have to leave Barcelona earlier in the summer.

The pair have been friends since childhood and looked set to play together at club level for the first time ever when Aguero joined Messi's Barça after leaving Manchester City.

However, the Catalan club's terrible financial state meant they were not able to re-sign Messi to a new contract and he subsequently joined Paris Saint-Germain after saying a tearful goodbye in a press conference.

Aguero has now said he talked to Messi about his eSports team to divert his attention away from his Camp Nou exit.

He told El Pais: "It was a moment of shock. He was very bad. When I found out I couldn't believe it. That Saturday I went to see him at his house. And, because of my personality, since I couldn't see it well, I tried to make him forget what had happened.

"I saw that he was half off and was trying to distract him. I was telling him about my eSports team and the things we were doing."

Barça have started the season poorly, with manager Ronald Koeman under pressure with his side ninth in La Liga - five points off the summit - but Aguero claims he has no regrets in signing for the club.

He added: "No. Let's be honest. What player does not want to be at Barça? I would tell you that the majority of footballers would like to wear this shirt, no matter how good or bad Barça is.

"I arrived with the expectation of playing with Leo and that a good team would be put together, which was what the club tried to do. When they called me, I thought: 'I don't care what they pay me. I'm feeling good and I'm going to help the team as much as I can'."

Aguero is yet to make his competitive debut for Barcelona due to injury but is back in training and could be available when they host Valencia on Sunday evening.

This article was originally published on 90min as Sergio Aguero reveals how he reacted to Lionel Messi's Barcelona exit.