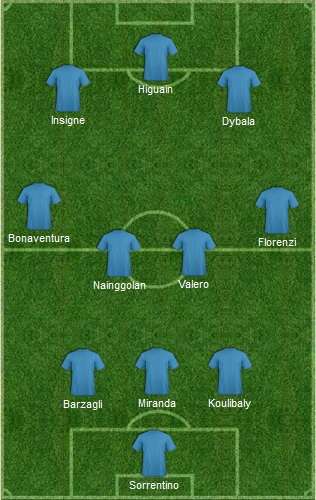 In a season that saw Juventus struggle mightily out of the gate, the Bianconeri ultimately managed to steady the ship and sail smoothly into a fifth consecutive Scudetto.

The 2015-16 campaign was also the season of Gonzalo Higuain, who carried Napoli to second place and automatic Champions League qualification, breaking the single-season scoring record with 36 goals in 35 games, whilst Roma made the third spot their own, after a wonderful second half of the season.

The autumn brought aspirations of championship contention for Inter and Fiorentina which by spring had become pipe dreams for Champions League football, the two clubs settling for Europa League births after torrid second halves.

The relegation battle was fought until the very last matchday, with Palermo dramatically escaping the drop at the cost of a surging Carpi, who would join Frosinone and Hellas Verona in the descension to Serie B.

Our Team of the Season is selected based on the 11 players who appeared most often in our Team of the Week, and will see a 3-4-3 formation deployed.

Do you agree with our selection? Have your say in the comments below or get in touch on Twitter @SerieAFFC!

One might automatically expect to see Gianluigi Buffon feature in a Team of the Season but to face an undeniable fact, most goalkeepers could excel behind a Juventus defence which conceded nearly half the shots that Palermo’s did. In the midst of ongoing arguments with coaches and with his president, the veteran was always prepared to give all that he had on the pitch. Despite the circus show that was Palermo, changing coaches a whopping nine times, Sorrentino was there to keep the team united. The Rosanero conceded 65 goals, second-worst after Frosinone, but without Sorrentino’s second-highest 123 saves, the Aquile surely would have been condemned to a season in the second flight.

A contract renewal until 2021 demonstrates just how crucial a 35-year-old Barzagli still is. The most consistent Italian centre-back made the difference for Juventus over the season, maintaining the usual sense of calmness, composure and concentration throughout the Bianconeri’s campaign. Massimiliano Allegri said it best when he declared, “We have the best defenders in the world”.

Despite the dissapointing fourth-place finish and a slight dip in form in the second half of the season, the Nerazzurri were fighting for the title in until January mainly as a result of the leadership and defensive capabilities of the Atletico Madrid loanee.

An absolute monster in Napoli’s defence, combining composure on the ball with unmatched physicality that enabled him to shut down most strikers. A mistake that lead to Simone Zaza’s winning goal against Juventus is really the only blip in an otherwise speectacular season. Koulibaly has demonstrated rapid growth as a defender in comparison to his first year in Serie A, forming with Raul Albiol one of the most reliable centre-back partnerships in Europe.

Florenzi is to be deployed as a right wing-back, but the fact that he has also played at right-back, centre-midfield and attacking winger is a good depiction of why he is so key to the Roma setup. Florenzi will play everywhere and will do it with a passion and reliability that are second-to-none. This year he managed to find himslef on the score sheet a total of seven times, often becoming Roma’s most valuable player.

Fiorentina’s awful run of form notwithstanding, the Spaniard has shown yet again what an intelligent midfielder he really is, assimilating the ideas of new coach Paulo Sousa and playing further up the pitch to pull the strings and inspire the Viola attack. Fiorentina were top of the league in January, and it was largely thanks to their number 20.

There is a reason Chelsea-bound coach Antonio Conte is reportedly trying so hard to lure him to the Premier League, and it is that the Belgian combines strength and quality in a manner that very few midfielders in Europe can match. He is complete, and has been one of the few Roma players to play at such a level throughout the entire campaign. To that he added six goals, including the winner against Napoli.

AC Milan had one of their worst seasons to date, but the Italian international made our Team of the Week six times, several of which came when the Rossoneri were putting together an impressive string of results between January and February under former coach Sinisa Mihajlovic. Bonaventura was one of the few players to show consistency and provide continuous quality to the Milan attack, delivering eight assists and scoring six times. The Diavolo sorely missed his presence while out with injury.

This season La Joya has emerged as a genuine star. Allegri allowed the youngster to slowly grow into the Bianconeri starting lineup and it paid dividends, the Argentine putting together 19 goals and five assists to help lead Juve to yet another Scudetto. He did a little bit of everything for the Bianconeri attack with his combination of pace, vision, trickery and finishing ability and acted as the link between the midfield and forward line.

It grows difficult to continue finding ways in which to address the capocannoniere’s greatness this season. Tallying 36 goals in 35 games in Serie A is difficult to fathom, and the new goalscoring record will likely be his to own for a very long time. He was the Partenopei leader and his heroics saw Napoli challenge Juvenuts until the last month of play. Imagine what he could have achieved had it not been for his three-match suspension late in the season.

The quality of the diminutive forward’s goals and assists is of the purest level, as exemplified by his wondergoal against Torino. A constant threat throughout the season, he finished the year with 12 goals and 10 assists and worked beautifully with Marek Hamsik and Higuain.