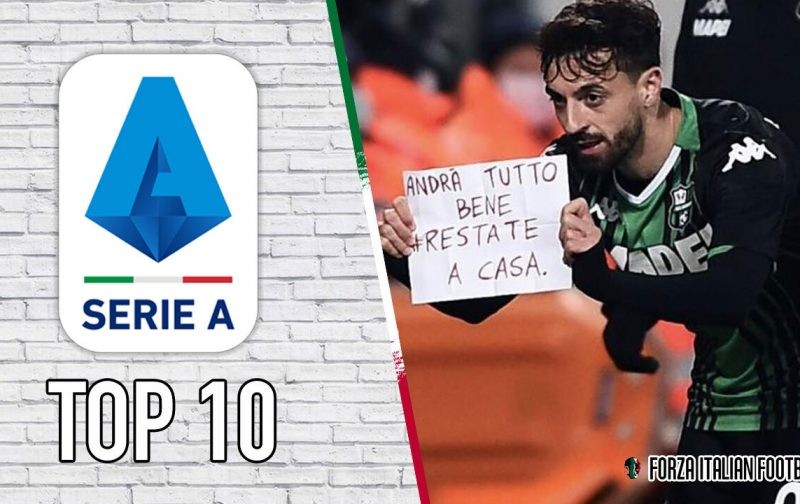 There we have it. The longest ever Serie A season is in the books, 11 months after it began in August 2019.

Throughout that time there have been plenty of memorable moments, both positive and negative, from on and off the field of play.

We reflect on 10 of the standouts.

The game of the Serie A season (with all due respect to Milan’s high-scoring classics against Inter and Juve) came on just the second week of the season in Turin.

Juve built up a 3-0 lead with less than half an hour to go before an epic Napoli comeback looked to have won a point – until Kalidou Koliably scored one of the most dramatic and comical own goals ever in Serie A. Once again, racism reared its ugly head in Italian football – a problem that sadly looks like it is a long way from reaching any kind of real resolution.

Mario Balotelli’s abuse in Verona led to shocking condemnation of the striker himself from plenty in power (including accusations that he was lying) and Serie A’s response with an extremely ill-judged anti-racism marketing campaign would have been laughable if it weren’t so horrific. The world of calcio was rocked by the gut punch last summer that Bologna boss Sinisa Mihajlovic had been diagnosed with leukaemia, an illness he tearfully vowed to defeat.

After months of treatment in which he offered guidance and watched his side from his hospital bed, he lived up to his promise and returned in December in a loss at home to Milan on what was one of the most emotional moments of the campaign.

The week before Christmas, Cristiano Ronaldo treated audiences to a goal at the Marassi that will likely be remembered as the greatest headed goal in Serie A history.

That’s no exaggeration. His monumental 2.56m vertical leap in which he hung in the air to await the arrival of the ball before thundering home a header was evidence of the privilege it is to have one of the game’s greats in Italy.

There was so much to enjoy about Atalanta this season. Papu Gomez’s continued magic, Josip Ilicic blossoming with age, Luis Muriel’s heroics from the bench, Ruslan Malinovskyi’s thunderous long-range shooting.

But when everyone clicked together, they were perhaps Europe’s most enjoyable team to watch. On a stunning THREE separate occasions (against Udinese, Torino and Lecce), they scored seven times! What a team.

Return of the King ‘Same Zlatan, different devil’. ‘I never left’. ‘God iZ back’. Just some of the memorable soundbites we were treated to after Zlatan Ibrahimovic returned to Milan once more on a short-term deal.

But as he always does, he backed up his talk with performances, helping revitalise the Rossoneri’s fortunes to such an extent with his quality and attitude that he boldly claimed that had he been there all season, Milan would be champions. We won’t argue with him. This season will always be remembered as the one that was massively overshadowed by the coronavirus pandemic and the havoc that it wreaked not only in Serie A but across the globe.

No better was that summed up than the early March fixture between Parma and SPAL in which the players were in the tunnel ready to take to the field in the closed doors game only for word to filter through that Serie A was on the brink of suspension and the players were ordered to return to the dressing room.

A 75-minute delay followed until the game eventually did go ahead before the league was ultimately halted – resuming again in June.

Everything will be okay With Italy reeling from the early toll the virus took on the country which would only get worse, football did at least try to lift some spirits before the shutdown in March.

Everyone’s favourite beer-brewing, journeyman Serie A striker attempted to do just that when Sassuolo’s Ciccio Caputo netted with no fans present and turned to the camera to reveal a sign which read ‘everything will be okay, stay at home’. There was personal tragedy for Napoli boss Gennaro Gattuso this summer when his sister tragically passed away, shortly before his side’s Coppa Italia final meeting with Juventus.

It was hard for any neutral not to root for him that night and while the first trophy of his coaching career will have been no real comfort, it was nonetheless a heartwarming moment for one of Italy’s icons. Ciro Immobile enjoyed an incredible goalscoring campaign that no defence nor worldwide pandemic could stop.

It culminated in him claiming the European Golden Boot and his strike on the final day at his hometown club Napoli saw him equal the single-season Serie A scoring record with 36 goals.