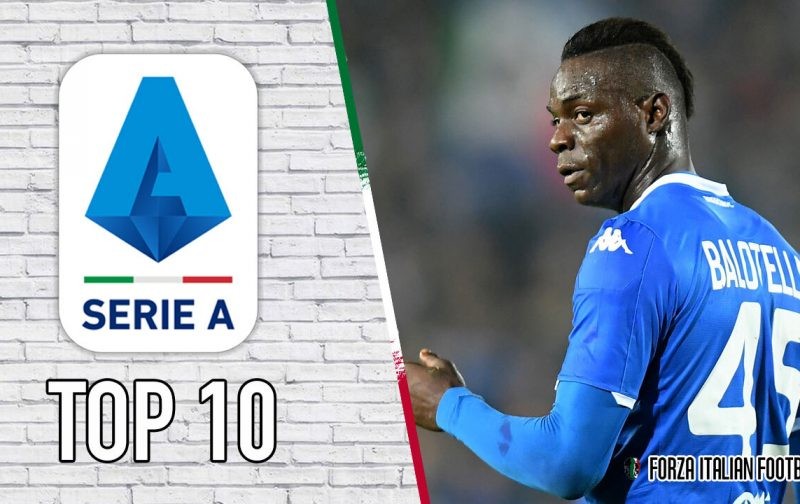 Another Serie A season is in the books, which means that it’s almost time for a new transfer window.

It’s the most delicate period of the year, the moment in which clubs take a gamble on players hoping that they will help the team in meeting the expectations.

Sometimes it works. Sometimes it doesn’t. Here were take a look at 10 of the worst signings in the 2019/20 Serie A campaign. It was supposed to be a dream: Mario Balotelli making his comeback in Serie A four seasons after his last appearance, signing for his hometown club after refusing a much bigger offer from Flamengo.

In best-case scenario he should have helped Brescia in avoiding the relegation by scoring so many goals that Italy coach Roberto Mancini would have been forced to call him for Euro 2020.

Instead, the worst-case scenario happened. Balotelli failed to make the difference for Brescia scoring only five goals in 16 games and the chaos surrounding the team, with three different coaches, didn’t help him either.

To make things even worse, Balotelli recently got fired by club’s president Massimo Cellino after he didn’t show up for training, failing to give a reason. He played his last game in March and the inevitable end to this nightmare has been Brescia’s 13th relegation in club’s history.

The only good note in Balotelli’s season it’s his goal against Lazio in January that made him the first player in Serie A history to score the first goal in two consecutive decades. Somehow Simon Kjaer can be considered as a candidate for both the best and the worst signing in the same season. He proved to be a key factor for AC Milan, helping Stefano Pioli’s side to turn things around after the break.

But you simply can’t forget how bad his stint at Atlanta was in the first half of the season. He played just five games in Serie A, failing to adapt to the ultra-physical system implemented by Gian Piero Gasperini.

To be fair it’s not completely his fault. The club should be blamed more. Kjaer arrived right after Martin Skrtel’s departure, who left Atalanta in early September after just 24 days with club.

They should have found another kind of player more suited to Gasperini’s style of play, just like they did in January when they signed Mattia Caldara and Bosko Sutalo. In Antonio Conte’s 3-5-2, the two wingers play the most important role. That’s why there was a lot of hype surrounding the arrival of Valentino Lazaro from Hertha Berlin.

His technique and his speed made fans dream about a player who could potentially be a game changer in Serie A, a big boost in their pursuit o Juventus. An early injury took him immediately out of the starting line-up and from then on Lazaro struggled. He didn’t play much and when he did, he rarely showed flashes of his talent.

Talking about him, Conte asked the media to have patience because it was natural for the Austrian to struggle coming from the Bundesliga but Lazaro never fit the profile of the typical Conte’s player, someone always focused and who plays with high energy.

His departure was inevitable and even if he only left the club on loan for Newcastle, it’s really hard to imagine a future for him at Inter. The six months at Barcelona, where he only played four games overall, made a lot of people forget how good Boateng was in the first half of the 2018/2019 season at Sassuolo.

Back then he proved that he can still play an important role in Serie A and that was the reason why Fiorentina signed him. He immediately shone with La Viola scoring against Napoli in the first game of the season with a wonderful strike from outside the box. After that, nothing. Zero goals and zero assists in the next 13 games, despite playing as a striker.

The situation for him really took a bad turn after Vincenzo Montella was fired. The relationship with new coach Giuseppe Iachini has never developed and the arrival of Patrick Cutrone has stripped him of his starting role.

It’s a shame that he left for Besiktas. Judging how the season rolled out for Fiorentina, Boateng could have been an important figure on the field and in the dressing room. We all hope we might see him one last time in Serie A before his retirement. Speaking of players who left Fiorentina in January, it’s impossible not to mention Pedro, the youngster who came from Brazil to great hype.

He was supposed to be the future of the team, the breakout star who should have helped Fiorentina in chasing the qualification to the Champions League and, who knows, maybe one day even winning the Scudetto.

He was an intriguing signing. Sporting director Daniele Pradé saw a lot of potential in him but the bet on the Brazilian has been a losing one for Fiorentina, who were forced to send him on loan to Flamengo.

His tenure in Italy has some resemblance to that of Gabigol. Both have been wonderkids in Brazil but failed miserably in their first stint in Italy. The hope for Fiorentina is that Pedro will have Gabigol’s same level of performance with Flamengo so that they can make some money out of his sale. If you don’t know him it’s fine, you don’t have to feel sorry about it. You would have to have followed Genoa’s season really closely to actually remember him.

Let’s recap. He signed as a free agent for Genoa after 116 games, 33 goals and eight trophies in five seasons at Galatasaray. He was supposed to be a great addition in attack, someone to score and who could have helped Genoa avoid relegation quite easily. Unfortunately for him, he didn’t play a single game under Aurelio Andreazzoli.

Then came Thiago Motta who caught everyone by surprise when, at his very first game in charge against Brescia in late October, played Gümüs as a starter. Three days after, he played again against Juventus. It seemed like the beginning of something great for him but after those two games he managed to play only eight more minutes.

With Davide Nicola, the third and last coach of Genoa’s season, once again Gümüs disappeared. He never played and he has never been called up to the squad. The end of this sad story saw Gümüs go back to Turkey in January, where he signed with Antalyaspor, scoring five goals in 10 games. There have been recent reports that Hirving Lozano could potentially leave Napoli to go on loan at Parma. You may or may not believe that rumour but it is the perfect example of how much Lozano’s reputation has fallen.

When he joined Napoli last summer he was the record signing for the club, who spent €42 million to sign him from PSV. He was supposed to bring a big boost in Napoli’s expectations and rapidly become a starter thanks to his skills. He failed in all of that, both with Carlo Ancelotti and Gennaro Gattuso.

He ended his first season in Serie A with just four goals in 25 games, never showing the flashes of his talent that in recent years made him one of the best young attackers in the world. The lowest point in his first Serie A season was when Gattuso kicked him out of the last training session before Coppa Italia’s final against Juventus because of his laziness.

From then on, the relationship between him and Gattuso has improved and it could potentially lead to a great season for the Mexican forward in 2020/21. Or at least that’s what Napoli fans hope. For the second straight season Simone Verdi is part of FIF’s worst signings list. We’re sorry but we simply can’t ignore the reality.

When he signed for Torino, everybody thought that after a disappointing season at Napoli he would have risen back to the level of performance he showed at Bologna. A more relaxed environment where he was supposed to be a regular starter looked like the perfect combination to get his career back on track.

Things didn’t go as planned and Verdi never managed to play at high level on regular basis. He closed his season with two goals and six assists, not the kind of performance you expect from the player who was supposed to lead Torino to another Europa League qualification.

It will be hard for him to get another chance at a big club and he needs to react quickly otherwise, in the latter part of career, he’s destined for a role in the supporting-cast for teams involved in the relegation fight. You have to feel a little bit sorry for the Romanian goalkeeper. He was enjoying a good season with Genoa but then in January Enrico Preziosi bought Mattia Perin back from Juventus, giving him the starting role.

In order to play, Radu decided to leave Genoa and go on loan to Parma, who back then needed a goalkeeper to replace Luigi Sepe, who was out with an injury.

Then the plot twist came with Parma’s caoch Roberto D’Aversa deciding to give Simone Colombi, the 29-year-old back-up with only six appearances in Serie A, the starting role for the four games that Sepe missed. Finally, Sepe came back from his injury, reclaiming his starting role and Radu didn’t play a single minute in his Parma stint, making his choice to leave Genoa a terrible one.

At least the future looks bright for him as next season he will be Samir Handanovic’s back-up at Inter and maybe in a couple of years he will be the starter. If Adrien Rabiot managed to save his season by performing at high levels after the suspension for the pandemic, Aaron Ramsey missed this chance and ended his first season with Bianconeri on a negative note.

He scored some crucial goals, like the one against Inter, but he never proved to be an elite player who could have helped Juventus in raising their game.

Injuries, as usual in his career, played a big factor in his performances but it also has to be said that Maurizio Sarri never found a clear position for him. Ramsey’s best games came by playing as a trequartista but he lost his starting role when the former Chelsea coach swapped to a 4-3-3.

In midfield, with Miralem Pjanic and Rodrigo Bentancur almost untouchable, the last spot has been occupied by Blaise Matuidi first and then Rabiot, two players who fit Cristiano Ronaldo’s style of play better than the former Arsenal player.

To sum it up, Ramsey isn’t that important for Juventus and it looks like that there isn’t much space for him in the future.