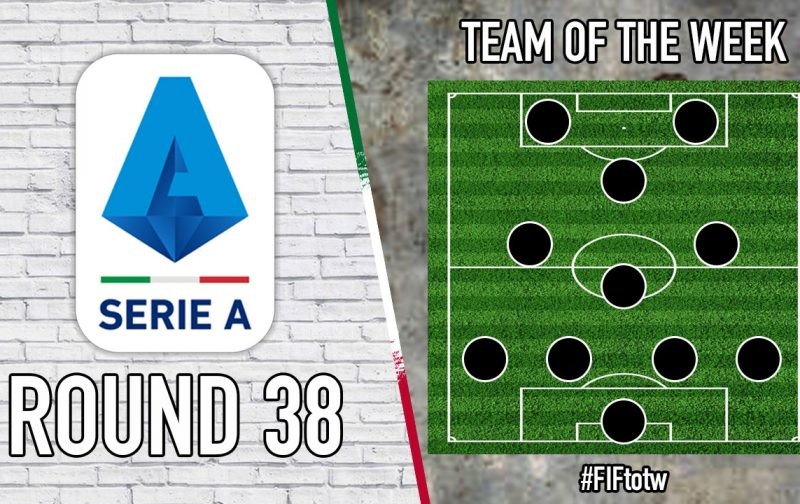 Juventus ended the season with a defeat, losing 3-1 to Roma, while Inter defeated 2-0 away to Atalanta.

Elsewhere, Genoa put three past Hellas Verona without reply and Parma beat Lecce 4-3 to send the Salentini down to Serie B. Got his 14th clean sheet for the season, making lots of superb saves against one of Italy’s most exciting teams.

Operated as a right wing-back in this game and he still managed to score his second goal in as many games. Was rarely troubled by his Atalanta opponent Robin Gosens.

The Rossoneri starlet has been deputising for the injured Alessio Romagnoli and the additional game time has increased his confidence. Cagliari attackers Gaston Pereiro and Giovanni Simeone struggled to get past him.

Impressed in both phases of the game and he doubled the Nerazzurri’s lead with a splendid goal from outside of the box.

Made a return to the starting line-up and got involved in the goals. Assisted in the second Rossoneri goal which was scored by Zlatan Ibrahimovic and then scored the third from a Giacomo Bonaventura pass.

Turned the game in the Gigliati’s favour in the latter stages, assisting for Christian Kouame and then converting a penalty in stoppage time.

Had a fine game in midfield and he supplied the cross for Antonio Sanabria to score the opener against Hellas Verona.

Ran tirelessly for the whole game, covering lots of ground, and he provided two assists in the second half.

The Argentine was involved in all three Giallorossi goals; his corner supplied the equaliser for Nikola Kalinic and he then scored twice.

His brace made the difference as the Grifone sealed their Serie A safety. The first goal was a diving header and he ran onto a Goran Pandev pass to notch his second.

Had a hand in all three Partenopei goals. Assisted for Fabian Ruiz, won the penalty that resulted in the second goal, and his pass found Matteo Politano for the third.