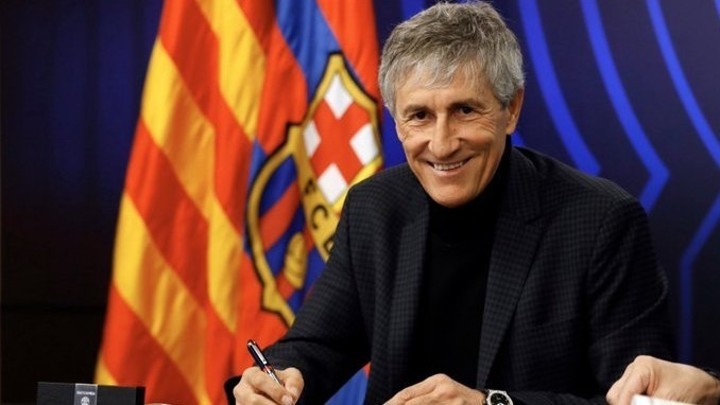 Quique Setien believes the updated laws concerning substitutes will have a negative impact on Barcelona.

LaLiga Santander clubs will be able to use five substitutes per match when the season resumes in order to reduce the strain on players' fitness.

"I think the five substitutes [rule] is going to harm us because we've resolved many games in the final few minutes and our opponents will [now] have fresh legs," Setien said in a videoconference with a coaching school from Las Palmas.

The matter of injuries to players is a worry for many coaches, including the Barcelona boss.

"There will be lots of games in a short time," Setien explained.

"The heat will have an influence on performance and it will affect injuries.

"We're hoping that it does less damage than people think [it will].

"It's possible that there will be lots of injuries like in Germany, because we've spent almost two months sitting on the sofa, not playing."

Setien has come under question in recent weeks after Lionel Messi said that he didn't think Barcelona could win the Champions League playing like they had been before the suspension of the season.

"Coaching another way of playing would be very difficult for me," Setien stated.

"Many matches are won and lost because of one-off situations.

"We've forgotten the show. We have to enjoy football."

Barcelona do, however, have the chance to win the LaLiga Santander title when the season resumes.

"We're going to play for our objectives in the 11 games [remaining] and that means a stress that we don't know how it will influence us," Setien said.

"All the teams are starting from zero.

"The teams will seem little like the [teams] they were when they finished [playing in March]."