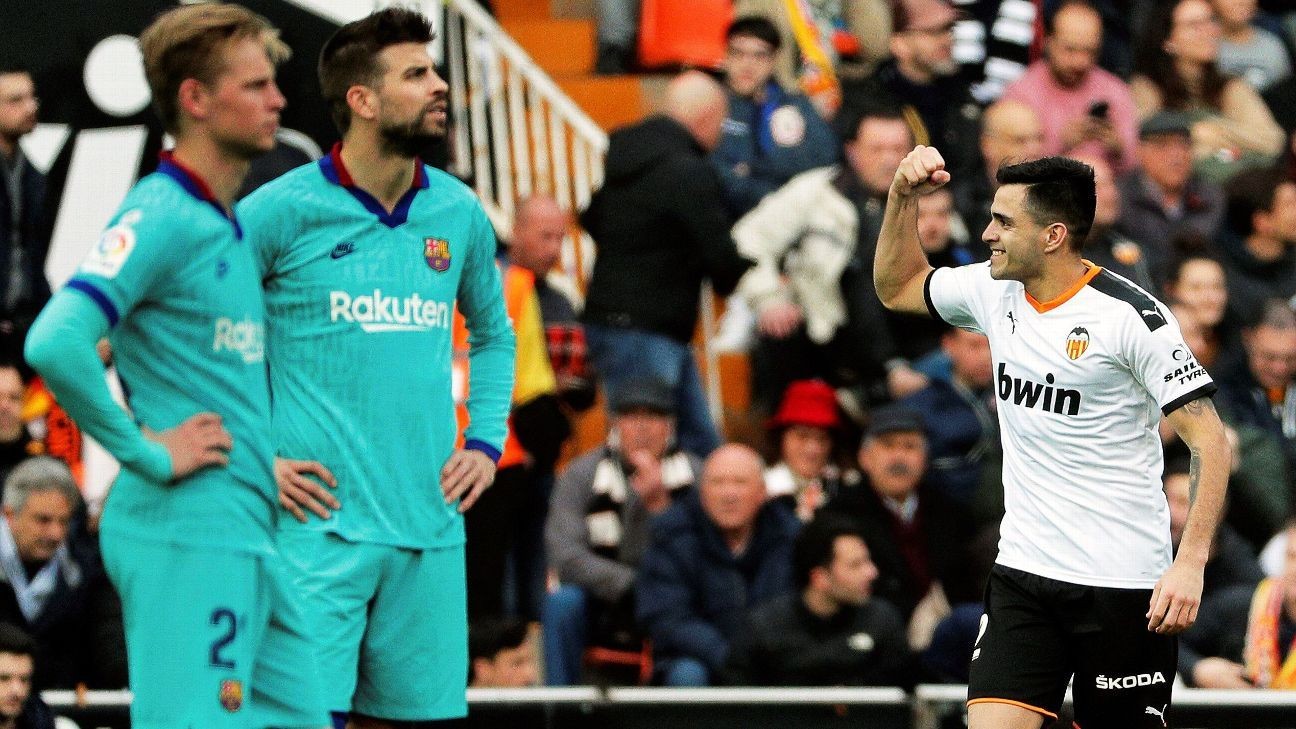 Quique Setien's honeymoon period as Barcelona coach is officially over after a Jordi Alba own goal and a strike from Maxi Gomez helped Valencia to a 2-0 win over the La Liga leaders on Saturday.

Alba deflected home Gomez's shot at the beginning of the second half and the Uruguayan striker, who missed a first-half penalty, then finished off the game in the 77th minute as Valencia earned their first win over Barca at Mestalla since 2008. They have won at Camp Nou since then, mind, and also emerged victorious when the two sides met in last season's Copa del Rey final.

Lionel Messi came close to equalising several times after Alba's unfortunate opener but he was unable to save Setien from slipping to his first defeat as Barca boss since replacing Ernesto Valverde earlier this month.

The former Real Betis coach had begun with a 1-0 win at home to Granada last weekend and followed that up with 2-1 win against third division Ibiza in the Copa del Rey in midweek. Defeat in Valencia will see Barca relinquish top spot if Real Madrid pick up a point or more against Real Valladolid on Sunday.

Valencia's win came without their captain, Dani Parejo, who was suspended, while Goncalo Guedes heads a long list of injured players at the club. Barca, meanwhile, were without Luis Suarez and Ousmane Dembele.

Barcelona lost for the first time under Quique Setien with defeat at Valencia. JUAN CARLOS CARDENAS/EPA-EFE/Shutterstock

Barca had over 70 percent of the ball in the first half but, as was the case in their narrow Copa del Rey win over Ibiza in midweek, they had none of the chances. They all fell to the home side.

After nearly 10 minutes of blanket Barca possession, Valencia's first attack should have ended with a goal. Jose Luis Gaya ghosted into the area and was brought down by Gerard Pique but Maxi Gomez saw his penalty saved by Marc-Andre ter Stegen.

The chances kept on coming. Gomez smashed the bar and Ter Stegen scrambled to push Kevin Gameiro's follow up behind for a corner. The German then saved a shot from distance from Francis Coquelin.

Valencia finally found the breakthrough the deserved after the break when Alba deflected home Gomez's effort. Messi came close to a leveller, firing just wide before testing Jaume Domenech with a free-kick and heading off-target at the far post.

The home side remained a threat on the break and they sealed the three points with 10 minutes to go when the unmarked Gomez received the ball in the box and sent Ter Stegen the wrong way.