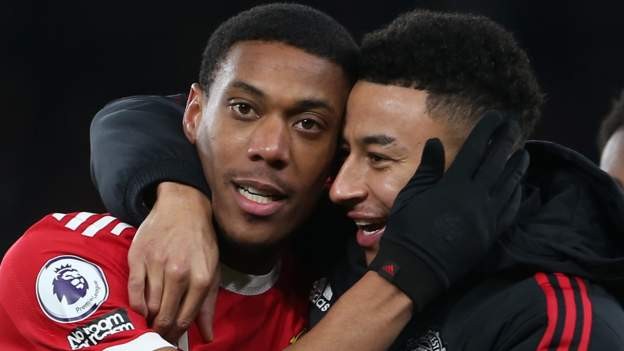 Rangnick on Ronaldo, Pogba and Martial

Sevilla have made Manchester United a loan offer for Anthony Martial that would see the La Liga side cover his wages for the rest of the season.

France forward Martial, 26, has been targeted by the Spanish club for a number of months.

It is thought he has indicated a willingness to take a pay cut to allow the deal to go through.

Martial, who joined from Monaco for £36m in 2015, has told Ralf Rangnick he wants a change of scenery.

That view has not changed even though Martial featured for the first time since interim United boss Rangnick took charge when he came on as a substitute in Saturday's 1-0 win against West Ham.

Martial has made 11 United appearances this season, scoring a single goal, against Everton on 2 October.

United are yet to decide whether to accept the offer.

Sevilla are challenging for the La Liga title and currently second in the table, four points behind leaders Real Madrid with 16 games remaining.

Martial is one of a number of United players with uncertain futures.

The Football News Show: What does Martial's future at Manchester United look like?

Jesse Lingard is still wanted by Newcastle, although BBC Sport has been told reports the Magpies have offered a £10m loan fee for the England international, whose contract expires in the summer, are wide of the mark.

Goalkeeper Dean Henderson, 24, is also looking to try to find regular football after losing out to David de Gea in the battle to be United's number one.