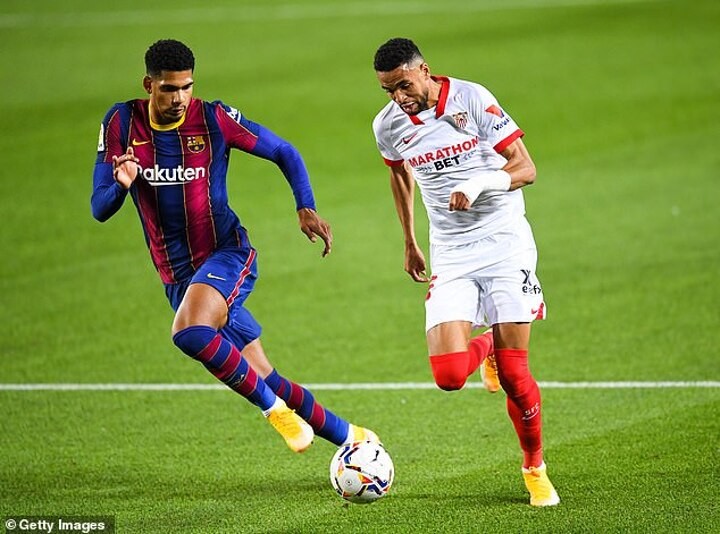 When Sevilla knocked Manchester United out of the Europa League two months ago it wasn't just the club's own supporters left celebrating.

'I received a lot of messages from Manchester City fans congratulating me. It's always good to beat Manchester United,' says Fernando Reges who is back in England on Tuesday night to face Chelsea in the Champions League.

That 2-1 semi-final win over Manchester United in Cologne was the game Sevilla should never have won. United had 20 shots to the Spanish side's nine but few sides are more resilient, and few players embody that resilience better than the Brazilian midfielder.

When he left Manchester City in 2017 it looked like the only way was down. Pep Guardiola had deemed him surplus to requirements and he had turned 30.

But after two years at Galatasaray, he was signed by Sevilla and that great rejuvenator of players – they have done the same for another former Manchester City player Jesus Navas, and for one time Newcastle striker Luuk de Jong – he is playing as well as ever.

After getting past United, Sevilla beat Inter in the final to win a record sixth Europa League last season.

'Everyone knows about the relationship the club has with that competition and we know we can beat anyone when we play it,' he says.

'It's not easy when you are up against Manchester United but we contested every ball and we took our chances.

'Of all the games we played in those knockout rounds I think the only time we were favourites was when we played Wolverhampton. But when we all believe, that makes things a lot easier.'

No one fancied them against Bayern Munich in last month's Super Cup either but they took the Germans to extra-time.

Now they are back in the Champions League and as competitive as that Europa League was, Fernando knows it's a step up.

'I won the Europa League with Porto in 2011 but the opponents were not as tough as the ones we had to face this time but I still think the Champions League is a little bit more complicated.

'There are no weak sides. Everyone is strong with fantastic players. Sometimes you'll face a team that maybe isn't great in terms of the group but they have individuals who really make a difference.'

An avid watcher of the Premier League he says of Chelsea: 'The movement of their forward players is excellent. They have a lot of quality in attack.

'They can hurt you even when they are not playing particularly well because of that individual quality.'

It will be his job to deal with that movement and protect a defence marshaled by Diego Carlos but missing his partner Jules Kounde.

The France under-21 defender Manchester City bid for in the summer will miss the game after testing positive for coronavirus on international duty.

I've worked in front of some very good centre-backs such as Rolando, Bruno Alves, and Vicent Kompany.

'But as a pair, I've never played with a duo like these two. They are both very strong, very quick and they have that humility to listen.'

Fernando is playing as well as any defensive midfielder in Europe at the moment but he still bows to two of those he believes really master the art.

'Sergio Busquets and Casemiro are still in a class of their own,' he says. 'They have won so much for so long, and at clubs where it is difficult enough just to stay in the team.

'I think right now Casemiro has just moved a little bit ahead of him but Busquets will always be the number one.

'And Busquets is a player who plays simple. The ball reaches him and if he can play it first time he plays it first time.

'If he has to allow himself a second touch then he will take a second touch. And if you see him take more than two touches then you know it's because he absolutely had to.'

Listening to him describe Busquets mastery it's a wonder Guardiola didn't see more value in Fernando.

His great pal at City Fernandinho was ahead of him as City's defensive midfielder as he made just five league starts in his final season.

In spite of the rejection there only seems to be admiration, coupled with an admission that it's not always easy under the Manchester City manager.

'Every training session for him is a chance to get the best out of each player. Every pass counts. You can't get a single bad pass past him.

'All that makes you improve more as a player. I loved him as a coach. It's true that sometimes he will put you in a position that you are not familiar with and at first you think 'madre mia what am I going to do here?' But you end up seeing the benefits.

'He's a coach that knows a lot, and asks a lot of you. No detail is too small to make a difference. And he is on top of all of them.'

A veteran of five different leagues Fernando knows no player can be every coach's favourite, and that when your face doesn't fit it's best to move on.

At Porto he took a young James Rodriguez under his wing because he realised how tough it was arriving in Europe from South America. He left Brazil when he was just 19.

Rodriguez' falling out of favour under Zinedine Zidane but finding his best form again under Carlo Ancelotti has not surprised him: 'He's a very clever player who can play one or two touch football but if he needs to dribble to get past an opponent he can do that too. He's a fantastic signing for Everton, I think they will be top six this season.'

And what about Sevilla? With 10 men for half the game they slipped-up at the weekend but big things are expected up against Barcelona and Real Madrid who have been reigned in a little by the economic effects of the coronavirus?

'It's not easy to compete with those teams but you know what football is like, Leicester have won a Premier League. It's difficult but it's possible. We are going to try.'

No one would expect anything less from Sevilla. They will be familiarly unfancied against Chelsea on Tuesday and, with Fernando steadying them in midfield, as determined as ever to upset the odds.